In anticipation of the first-born woman did not always feel positive emotions. Very often alarmed by the upcoming birth. Expectant mother care when the baby comes, will they be accompanied by severe pain, how long. 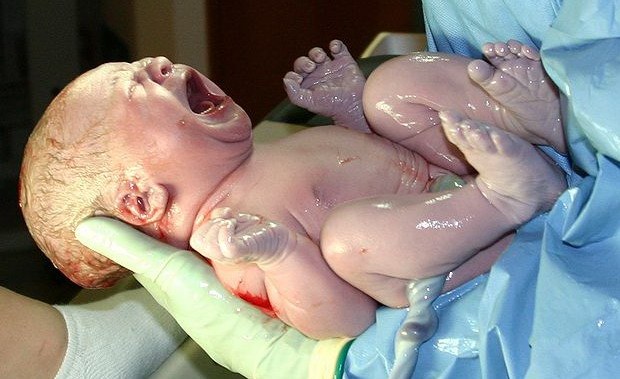 Related articles:
How many will last for childbirth is influenced by many factors: the weight of the baby, size of pelvis, maternal age, heredity. An important aspect is the order of birth. In normal povorotami the entire act lasts 10-12 hours, and the birth of a firstborn is even more time - 15 to 20 hours.

Despite the fact that all women want to give birth as quickly as possible, the duration of labor less than 4-6 hours is considered unfavorable.

Natural childbirth is a process that consists of three main stages: the opening of the cervix, expulsion of the fetus, the output of the placenta. The disclosure period begins with the establishment of an effective labor - contractions. Sometimes birth begins with premature rupture of membranes, which is considered an unfavorable factor. The beginning of the second period is the full opening of the cervix up to 10-12 cm During this phase, there is a growing contractions, lowering predlagay part of the fetus to the pelvis and the emergence of attempts. The second stage ends with the birth of a child. On the output stage of the placenta from the womb expelled placenta and membranes.

The differences of the first birth

The first birth is different from the next. Subjectively women consider their most difficult and painful. The appearance of the firstborn takes longer mostly due to a longer first stage. Full disclosure of the cervix for the first time takes 13-18 hours, and then 10-11. This happens due to the fact that the first birth under the influence of labor first, there is disclosure of the internal uterine OS, and then the outer. Povorotami both processes run simultaneously.

Many women say that the second time the contractions seem less painful. This may explain the greater susceptibility of the cervix, and psychological readiness mother.

The period of the expulsion in women in the first birth takes 1-2 hours. In that case, if a woman had given birth, this stage is somewhat shorter - about 0.5-1 hour. As for the third stage, the duration of first and subsequent births is not significantly different and ranges from several minutes to 2 hours.

The first time the efficient labors is not from Central controllers in the brain and receptors in the uterus "study" the right interaction at the time of birth of first child. Accordingly, the second time the body is not "learning", but only "remembers" the necessary arrangements.

The main hormone responsible for labor - oxytocin - is produced in the hypothalamus. Its role is especially significant in the first stage of labor.

The duration of the first birth substantially more for the duration of the stage of disclosure. In addition, the expulsion of the fetus takes more time. The passage of the fetus through the birth canal in the second stage is slower at pervorodyaschih, since the tissues are first subjected to strong tensile and have a strong resistance movement predlagay part.
Is the advice useful?
Присоединяйтесь к нам
New advices