What to do with an old umbrella

Umbrellas is the subject which are found in almost every wardrobe. Protecting you from the weather, they eventually become useless. Usually first broken spokes and mechanisms, and fabric dome remains intact. Favorite umbrella can be taken in for repair, but the rest, applying creative thinking, it should not be used for the purpose. 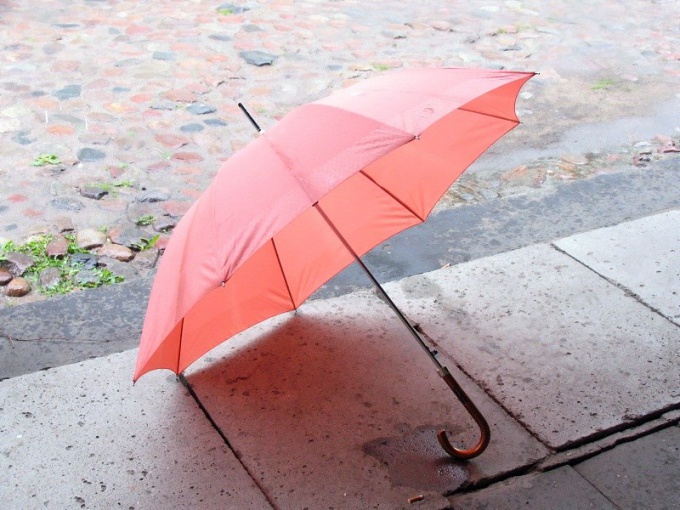 Cape on the shoulders of the old umbrella

Cloak can be useful in the household, if you cut his household or dye their hair. The slippery fabric of the umbrella is quickly erased, it is easy strahovatsya hair.

Nail scissors to gently fight back the fabric from the spokes of the umbrella and remove the cover from the frame. Cut it from one side to the center. Widen the hole in the Central part of the cover so that it can freely hook on the man's neck.

Treat all cuts on the sewing machine, making a double ACC. Then cut three pieces of tape from the Velcro and make the zipper in three places in the section. It is possible to put a single long zipper, so if you would prefer.

The neckline and hem of a Cape can handle braid, prostracii it on a typewriter.

Spectacular decoration for door or wall can be made of umbrella. You'll need artificial flowers on long stems and ribbon. Hang the umbrella on a hook by the handle. Insert the bouquet so that the flowers were clearly visible. Finally, tie the umbrella on the center ribbon.

Original decoration for the garden can be drawn from the umbrella and several rolls of black garbage bags. Fight back waterproof fabric with metal frame. Install the umbrella, sticking its tip into something dense, such as in the ground. Open it and lock the mechanism in this position with tape.

To the handle of the umbrella, submitting it to the head of the Swan, attach tape or duct tape under the corner of a small thin plate, which will symbolize the bird's beak. Then take a roll of black plastic bags under the debris and begin to wrap your crafts with the tip of the beak.

The basis for the beak can be cut from a plastic bottle.

Try to do the winding are proportional. That is on the head of Swan place a layer of packages thicker, and the neck wrap evenly so it was the same thickness throughout its length.

Separately wrap a black bag the skeleton of an umbrella, where the fabric was attached. Do this by positioning plastic strip of packets between spokes in a staggered, so that all the spokes are fixed in a certain position. Start with the bottom of the umbrella, that is where it stuck.

Look at the result of your labors. If the Swan suits you in this way, paint red acrylic paint the beak of a bird right in the black packages. Now you can stick a hack in a suitable place in a suburban area, and after a rain to drain from it the accumulated water.
Is the advice useful?
See also
Присоединяйтесь к нам
New advices