How to do a lobotomy

Almost immediately after its introduction, the lobotomy began to cause disputes among scientists and the General public. Such surgery is considered and "inhumane", and "relatively effective" in the treatment of certain diseases. According to some modern scholars, despite the fact that there are several methods of lobotomy, the mechanism of its impact and consequences has not been studied. 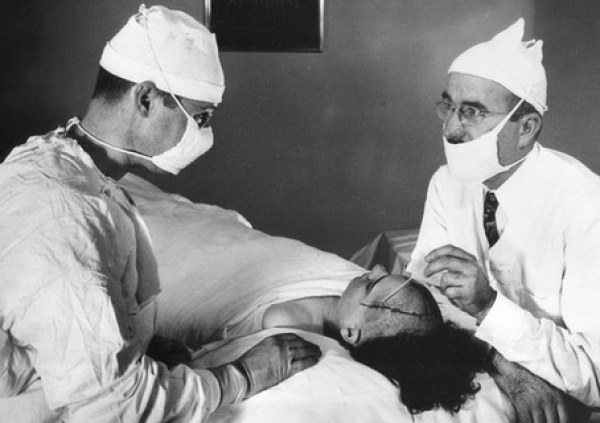 Moniz is the founder of the method

For the first time the technique of conducting lobotomies was designed by the Portuguese scientist EGAS Moniz in 1935. A year later, on his method held the first operation. Moniz himself, who was suffering from gout, don't take practical participation. He directed the actions of the neurosurgeon Almeida Lima, who conducted the intervention.

EGAR Moniz, considered the founder of the lobotomy, called his brainchild a leucotomy (which in Greek means "white cut") because in this case the surgeon needed only to penetrate the white matter neuronal connections that connect the frontal part of the brain with other departments. The author of this method suggested that this surgery can help in the treatment of the most hopeless patients.

The Nobel prize which was awarded to Monica in 1949 "for his discovery of the therapeutic effects of leucotomy in certain mental illnesses" that led to the recognition and distribution methods throughout the world. However, not many scholars engaged in the study of the possible effects of lobotomy.

American psychiatrist Walter J. Freeman developed his own method of carrying out this operation. It was first implemented practically simultaneously with the lobotomy Moniz in 1936. The method of Freeman, called "transorbital lobotomy" was considered at the time much less traumatic, as all manipulations were performed through the eyelid of the patient. The surgeon in this case did not need to drill the skull of the patient.

According to Freeman, such intervention could have eliminated the emotional component of disease "mentally ill" that existed "at the level of the stay-at-home disabled person or pet".

As claimed by American scientist, a similar intervention was necessary to patients suffering from various mental disorders (psychosis, depression, insomnia, mood swings, neurosis, deviant and criminal behavior, and homosexuality). Over time, however, on the operating table fell and those who did not required such measures, for example, troubled Teens.

For the first lobotomy that was performed according to the method of the American psychiatrist, as anesthesia was used ect. The tapered end of special tool, the form closest to the ice pick (at first Freeman, it was used during operation), through the bone of the eye socket into the brain of a patient. The thin bone is penetrated with a surgical hammer. The surgeon then movement of the handle cut through the fibers of the frontal lobes.

Some people undergoing the operation, became limp, apathetic and indifferent. Sometimes, individuals had to master the simplest skills to independently hold a spoon, to go to the toilet and dress.

Lobotomy is widespread in popular culture, becoming one of the symbols of the so-called "punitive psychiatry", and in the USSR "inhumane" method of Freeman often used to criticize the "bourgeois" science.

The Soviet method of operation

Your contribution to the development and improvement of lobotomy made and scientists of the Soviet Union. After the end of world war II research in the field of psychosurgery has done an outstanding Soviet neurosurgeon B. G. Egorov, who developed another technique of lobotomy.

Instead of having to work through preseve a hole or the roof of the orbit, Egorov proposed to carry out osteoplastic trepanation. In this case, a surgeons were more extensive review, which allowed much more accurate to carry out all necessary interventions in the brain of the patient. The method of the Soviet scientist also meant the more gentle conduct of the lobotomy - the surgeon is usually operated within the same lobe, thereby eliminating the possibility of damage to subcortical structures, and pyramidal tracts.
Is the advice useful?
Подписывайтесь на наш канал