Today, more and more modern Housewives tend to the kitchen to the distinction between the hob plate and oven. This is considerably more convenient from the point of view of cooking, everything can be at the same level, resulting in no need to bend over to check whether the food. In addition, this distinction significantly helps to save space in the kitchen. The main question that arises in women is what cooking surface to choose: conventional or induction. Indeed, each of them has its own advantages and disadvantages. 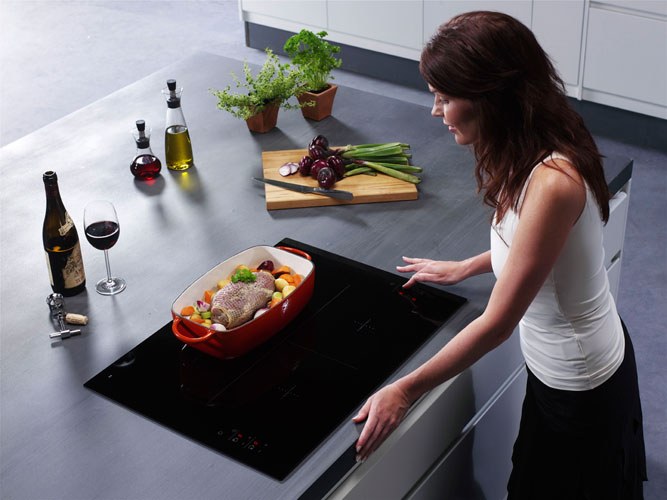 Related articles:
The hob is the top part of a normal plate with the burner, which is usually prepared and heated food. The choice of such a panel should be approached very seriously, because it must meet several important criteria: to be a reliable, stable, quick to heat up and also rapidly cool down. Modern manufacturers offer women different options of plates, however, to choose only those ladies who have the house has an electric stove.

Conventional glass-ceramic cooking surface - one of the favorites. And it is simply explained. First, she's much prettier than the regular plate with cooking hobs. Second, it provides more power and therefore runs much faster and better. Third, these panels usually there is advanced functionality, contributing to a noticeable easing of the hostess. However, one of the main doubt which usually overcomes ladies when choosing a plate of this kind is its strength. There is a common misconception that stainless steel is very fragile, and enough for her to drop something so easy to break. Yeah, not really, if you deliberately hit the surface of such plates with a hammer, it will shatter. But in General, according to European standards, glass ceramic must withstand a drop of nearly 2 pounds of pot from a height of about 15 cm.


However, the fact that the glass ceramic is afraid of abrasive tools is undeniable - it can not be cleaned with powder, smeared on her dry cereal, etc. All this leads to the violation of the integrity of the upper layer and the failures.

Glass ceramic is usually a flat thin panel with a picture of her plates. All heating elements are hidden inside. This panel transmits heat in one direction only - upwards. Around the same heat basically does not apply. And this is one of the big advantages of such furnaces cannot be burned (only if you prionitis directly to the burner). Due to the different innovative designs and the materials used, such cooking surface much faster in its job. For example, to heat 2 liters of water to boiling from the cooking vitroceramic surface will take about 10 minutes. For comparison, a standard cast-iron cooker will do the task in 13 minutes.

Control the burner on this type of panels can usually be two options - mechanical and touch. The second a priori preferred, as the surface becomes more convenient for washing and cleaning. In addition, glass-ceramic cooktop surfaces are usually equipped with sensors for heat the burners that allows you to deal with them much more cautious. The only drawback to the hob with the sensor that they are much more expensive.

Despite the fact that the history of induction cookers has for 25 years, with particular popularity they have gained only today. This was due, experts say, that such plates were very expensive. They are not cheap. However, when compared with standard glass-ceramic, the difference will not be too big.

Induction is considered the most clever mechanism of plates. Because it produces so much heat as needed to warm up a certain diameter of the dish. In addition, if the dishes would be wrong to stand on the ring or even be empty, the stove simply will not turn on.

The main advantage of induction cookers - speed. The mechanism of heating is quite simple. Under the ring is an inductive coil with copper through which the current passes. The result is a vortex magnetic field, which can easily pass through the surface of the plate (by the way, also in most cases, ceramic) and acts on the bottom of the pan.

There is also a disadvantage. Need a special kitchen utensil. To check if the pots and pans to the stove you can use a simple test: apply to the bottom magnet. If he doesn't fall off, so this cookware is suitable.

Despite the fact that the cookware heats up the cooking surface itself remains relatively cool, so induction plate is almost impossible to burn yourself. In addition, the speed of it is much higher. To boil water induction panel takes all of 4 minutes. It also cools down in just a few seconds. As a result of careful distribution of physical properties in this type of plates is that the food on an induction cooking surface does not stick, the food remains healthy and tasty (due to the time-saving vitamins have time to break down). And yet, according to reviews Housewives on the forums, to build an induction stove at any convenient place in the kitchen will not be any problem.
Is the advice useful?
See also
Подписывайтесь на наш канал