Benefits and harms of soy meat

Today, the soy meat can be found on the table not only among the adherents of the vegetarian diet, but meat lovers. The secret that lies in the unique composition of this product, which in some diseases is simply indispensable. 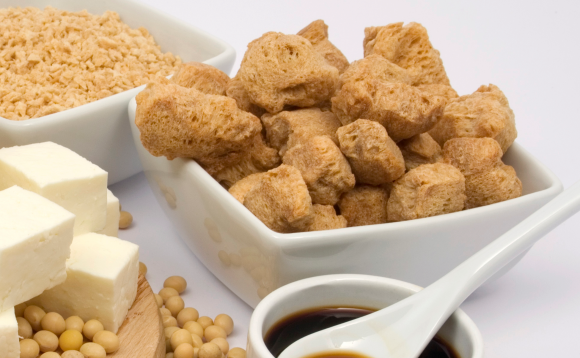 Related articles:
Soy meat came to Europe from Asian countries where to use soy in cooking began several millennia ago. And as in many countries of Asia normal meat was a luxury of the soy and over time learned how to make vegetarian counterpart, which quickly caught on in other countries.

Produce wheat meat dough kneaded on the basis of water and defatted soy flour. The product is brought to readiness with reusable pass through a special device resembling a meat grinder, resulting in a spongy mass, which is cut into pieces and dried. Soy meat is produced in the form of chops, goulash, minced meat, meatballs and other processed foods.

Dried soy meat can be stored in this condition for about a year. However, the cooked product is recommended to be consumed within three days.

Natural soy meat is low-calorie and dietary product, which is ideal for people who are overweight. In the same way as ordinary meat, soy contains large amounts of easily digestible protein needed by the human body. In addition, it includes polyunsaturated fatty acids such as linoleic, which falls in the human body solely through food. Soy meat is rich in beta-carotene, vitamins E, PP and vitamins of group B. It also contains potassium, calcium, iron, phosphorus, choline, thiamin and folic acid, which has beneficial effects on memory and development, responsible for good mood.

All the vitamins and nutrients in soy meat contained in biouswoyaemosti, so they are easier and faster absorbed by the body.

Thanks to this combination of soy meat cleans the walls of blood vessels from harmful cholesterol, promotes long-term saturation effect and stimulates intestinal motility. It is recommended to eat the elderly, as well as those who are diabetic, suffer from allergies, hypertension or atherosclerosis.

Natural soy meat is not harmful and can enter the menu, even for children. The only contraindication to its use – individual intolerance to soy. Another thing is the meat produced from genetically modified soybeans, today flooded store shelves around the world. It is believed that the consumption of such a product, especially in large quantities, can lead to decrease in immunity, metabolic disorders and condition of microflora in the body, as well as the development of cancer.
Is the advice useful?
Подписывайтесь на наш канал