How to grill the loin

Roast loin refers to the exquisite dishes. If you cook it for the first time, it is preferable to start with the lamb loin. Roasted this kind of meat especially tasty. And recipes roast pork loin will be very useful for the holiday table. 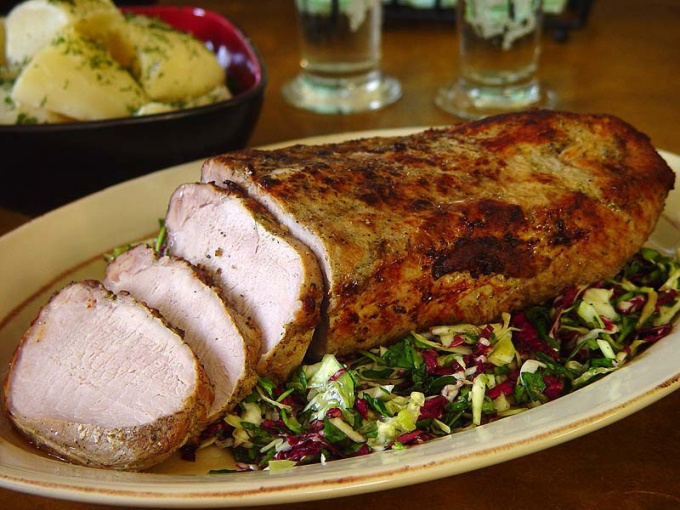 Related articles:
You will need
Instruction
1
For cooking roast pork loin in an Apple glaze, prepare 500 grams of sour apples. Cut each one into 4 pieces, remove seeds from the core and boil until tender in a small amount of water with 75 grams of sugar 1 tablespoon of lemon juice and a quarter sticks of cinnamon. Once the apples are ready, remove the cinnamon and grind them into a puree with a blender.
2
RUB with salt and pepper a piece of pork loin weighing at least four pounds. Lard it 10 buds cloves. Preheat the oven to 180oC, place the loin on a baking sheet the bacon up and fry a little more than one hour. Remove the pan and spread the meat applesauce. Due to this, the top loin is Golden brown and covered with frosting. Put the meat dogadivaetsya for 40 minutes.
3
Roast lamb loin with herbs. To do this, mix 1/4 tablespoon of thyme, tarragon, oregano and Basil with one tablespoon of vegetable oil. Liberally RUB the meat with salt and the butter-spice mixture. Pour into the pan a little water, put the meat and place in a preheated oven 230оС. Once the meat is covered with brown crust, reduce the temperature to 180oC and cook until tender. From time to time pour the meat with the separated juice.
4
Cook a grilled loin with mushroom sauce. To do this, cut 4 slices of pork loin with a width of not more than 2 inches. Pour into a bowl 2 tablespoons olive oil, the same amount of soy sauce, one tablespoon of lemon juice, one tablespoon of liquid honey. Add a pinch of dried parsley, pepper, salt and put through the press a clove of garlic.
5
To the resulting mixture, place the slices of loin and leave to marinate for half an hour. Turn the oven and allow it to warm up to 200oC. At this time, remove the meat from the marinade and place on a dry heated pan. Fry for 3 minutes on each side. Put the slices of pork loin in a ovenproof form and put in the oven for 15 minutes.
6
Prepare the sauce. To do this, cut into small dice one onion and slice the onion into strips 200 grams mushrooms. In skillet where meat was browned, pour a small amount of vegetable oil, put the mushrooms and onions. Sauté them for 7 minutes. Heat 200 grams of cream and pour them in a thin stream to the vegetables. Simmer the sauce until then, until it becomes thicker. The loin slices arrange on a plate and pour prepared sauce.
Is the advice useful?
See also
Подписывайтесь на наш канал