How to bake a potato

Baked potatoes are a rare guest in the home kitchen. Usually when we are talking about the side dish, the choice is made in favour of boiled, fried or stewed potatoes. However, the potatoes baked in the oven has a special, nothing on similar taste. And from time to time to pamper her yourself and your household is a must. Select the right recipe and make sure that baked potato is not only delicious, but also very simple. 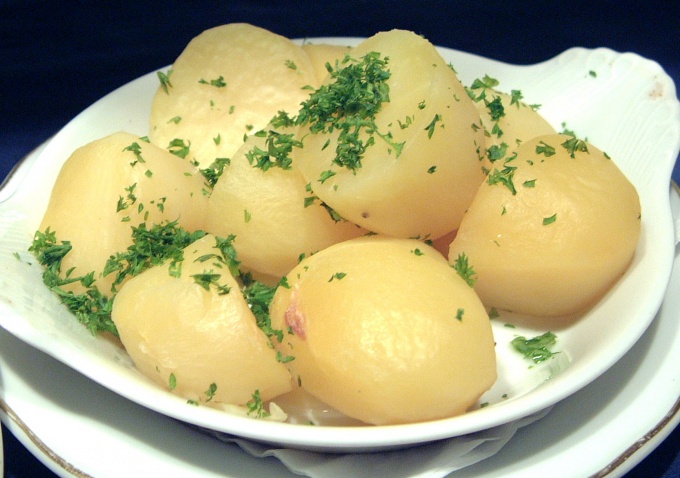 Related articles:
You will need
Instruction
1
The potato baked as a whole. 10 average sized potatoes peel and cut into thin slices, not dorezaya to the end that the potato looked intact. Salt. Grease the form with butter, put in it the potatoes and on each put a piece of butter. On top sprinkle the potatoes with grated sharp cheese. Place the odds in a preheated 200 degree oven and bake until the appearance of a Golden-brown crust. Such potatoes can be a great side dish for braised meat or poultry.
2
Baked potatoes in English. 8 large potatoes thoroughly wash, dry, sprinkle with salt and prick the peel with a fork. Each tuber wrap in foil and place on a baking tray so that the potatoes do not touch. Place baking sheet in pre-heated oven. Bake the potatoes at a temperature of about 200 degrees for at least an hour. Readiness check with a fork, stabbing the tuber directly through the foil. If the plug is freely included in the tuber, the potato is ready. Remove the baking sheet, cut each tuber crosswise without removing it from the foil. Stuff potatoes with grated sharp cheese or canned tuna mixed with corn. Serve hot.
3
Baked potatoes in Italian. 8 large potatoes, wash and boil until soft in small amount of salted water. Cool potatoes, cut in half. Cheese and ham cut into thin round slices, tomatoes circles. In half of the potatoes place the ham, tomatoes, cover with plastic cheese. Put the potatoes in the form, greased with olive oil, and bake in a well preheated oven for about 20 minutes. Before serving, sprinkle with finely chopped Basil.Serve as a main dish.
4
Baked potatoes with meat. 6 average sized potatoes, boil until soft in salted water. remove the tuber,dry it, cut it in half. Gently remove with a spoon the middle of the potatoes,prick the finished potatoes insome form with a fork inside. Salt the halves, grease them with sour cream. Prepare the minced meat. Saute in butter 1 finely chopped onion until Golden brown. 300 grams of raw ground beef mixed with onions, add 3 tablespoons of sour cream and salt. Start potato- ing halves with minced meat, put them on a greased baking sheet. On top of the potatoes and spread with sour cream and bake in preheated oven until Golden brown. The willingness of potatoes check with a fork.
5
Potatoes baked halves. 8 average sized potatoes and wash thoroughly. Dry the tubers with paper towel, cut out in halves, RUB each with a clove of garlic and brush with olive oil. Salt. Lay the halves on a baking sheet, greased with vegetable oil. Place the potatoes in a pre heated oven. Bake until the appearance of a beautiful Golden brown. Before serving, sprinkle with finely chopped greens. This potato is great for meat steaks, vegetable salads and meat stews.
Useful advice
For better Browning of baked potatoes for two minutes until cooked, you can turn on the oven grill.
Is the advice useful?
See also
Подписывайтесь на наш канал