How to determine the environmental class of the car

Environmental class characterizes the car exhaust emissions containing harmful substances (carbon monoxide CO, hydrocarbons Cm Hn , nitrogen oxides NOx and particulate matter). As a rule, it is determined at customs (for imported equipment) and indicated in the title. On the basis of the verification of the brand of the machine with the database of the Ministry of industry, containing information about all produced in the world cars, the customs officer assigns the environmental class. According to Russian legislation, imported cars below 3 classand it cannot be operated. 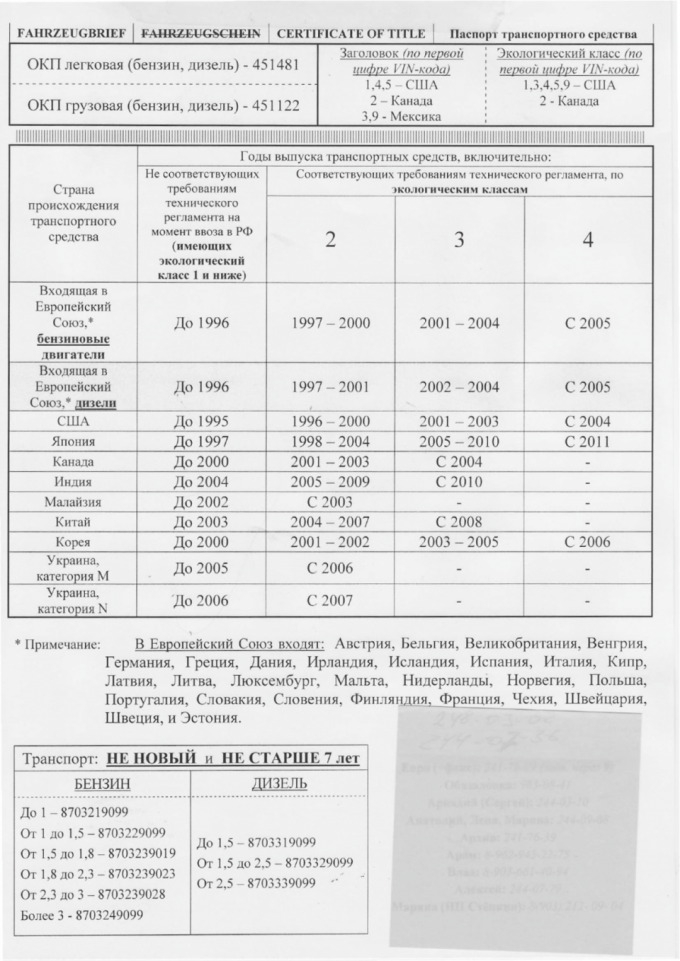 Related articles:
Instruction
1
Standards, Euroeuro 1 limiting the content of harmful substances in the exhaust of gasoline engines. In Europe acted in the first half of the 90s
Euro 2 compared to the previous classof om became harder 3 times. In Russia introduced in autumn 2005.
Euro 3 another 30-40% have tightened standards for emissions of harmful substances. Acts on the territory of the Russian Federation in January 2008 and prohibits the importation and manufacture of vehicles not complying with this class.
Euro 4 introduced in Russia since 2010. Operates in Europe since 2005.
Euro 5 plan to introduce in 2014 throughout our country.
2
To learn the environmental class of the car you have to know its VIN number. Knowing this number, you can determine the class, according to the database of issued environmental certificates. Baza posted on the website of the Federal Agency for technical regulation and Metrology (see references). The VIN number of the vehicle must coincide with the base not less than 9 first characters. Also must exactly match the engine number. If the database listed the car in 4 or 5 gradee, to confirm this fact (upon receipt PTS) show a printout from the website. In case if the first 9 characters are different ecological class, you should introduce a greater number of characters. If the search result has remained ambiguous, will have to be certified car
3
How to read certificate of sootvetstveno certificate. The certificate number letter designation up to the first dot indicates the country that issued the certificate. Alphanumeric designation after the first point – abbreviation of certification authority. The following letter code of the object of certification. Hereinafter, the internal sequence number of the certificate.
Date of issue of certificate: as of this date the car can be imported to the territory of Russia any day and only once.Following is the full information on certification, on the full name of the product (the car), its VIN number, type and engine size and its environmental classE. it is Reported, the requirements of which documents match the car. Also contains full information about the Complainant, about the firm-manufacturer, on the tests and measurements and on the submitted documents.
Useful advice
Environmental class can be found In-Drive and VINformer (see references). There you can learn the main characteristics of the car and to see with attachments
Is the advice useful?
See also
Присоединяйтесь к нам
New advices