How to cook noodle soup

Easy noodle soup is especially good when cooked on a transparent chicken broth. Soup with pasta prigotavlivaya at once, if you re-boil, the noodles will be overcooked and tasteless. If you cook a large pot of soup, then use the method of adding the pasta directly into the bowl. 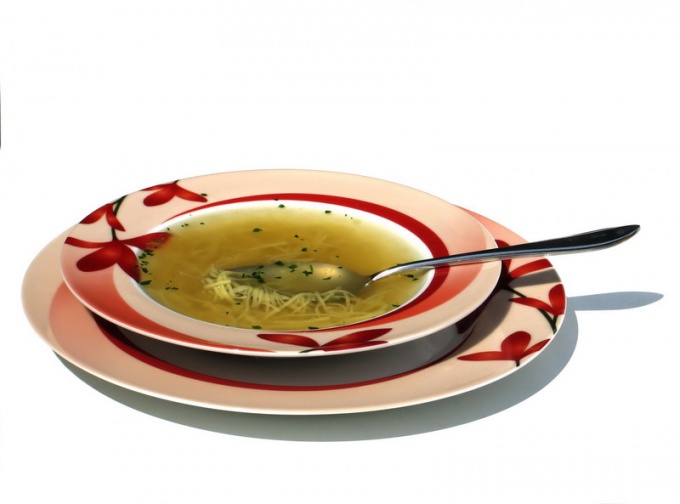 Related articles:
You will need
Instruction
1
Boil the broth. Chicken breast with bone wash under the tap. Put in a saucepan and cover with cold water. Cover tightly and place on high heat. When the water boils, reduce the heat to boil the water was weak.
2
Remove with a slotted spoon appearing foam. Cook the breast for about an hour. Salt the broth at the end of cooking.
3
Remove the brisket from the broth. Separate the meat and cut into small pieces.
4
If the broth is not sufficiently transparent, whisk one raw protein. Place the pot with the broth on the fire and pour into it a thin stream of protein. Bring it to boil. Turn off the heat and strain the broth through a fine sieve into another pot.
5
Peel a few potatoes. Cut them into cubes and put in boiling broth.
6
Free from onion peel the onion and slice it. Wash and peel the carrots and grate on a coarse grater or cut into thin circles. Lightly fry onions and carrots in a hot frying pan in oil. Add sauteed vegetables to the broth.
7
Pasta to put in soup in two ways. Depending on the quantity cooked soup choose for themselves the appropriate option.
8
The first method. Boil water in a small saucepan. Pour it in the vermicelli and boil for 2 minutes. Then drain them through a colander. Noodles put in boiling soup. Such preliminary preparation of pasta in boiling water will preserve the transparency of the broth.
9
The second method. Put on fire a saucepan with water. When the water boils, add salt, add a tablespoon of vegetable oil and pour the noodles. Boil pasta until tender. Drain in a colander. Put it in a container. Add vermicelli in a bowl and pour hot soup ready.
10
For the table setting for dinner place a beautiful bowl with chopped parsley and dill, so everyone could sprinkle the soup in the plate.
Is the advice useful?
See also
Подписывайтесь на наш канал