How to learn to read Tarot

The cards of the Tarot have been around for over 600 years. Someone believes in their magic, someone is skeptical. But regardless, you have decided to learn to read the cards Tarot just for fun or are preparing for a serious esoteric experiences, there is a basic set of rules that allow to take the first step towards a mysterious deck of Tarot. 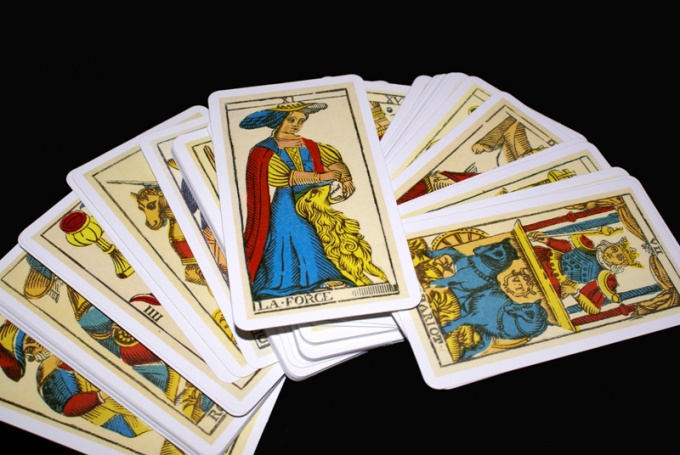 Related articles:
You will need
Instruction
1
Select a deck of Tarotthat is right for you. A basic deck of Tarot consists of 78 cards, divided into two Arcana. The major Arcana of 22 cards – major cards, each of them endowed with particular value associated with the mysteries of Life, the Universe, spiritual development, and human destiny. Younger Arcana consists of 56 of support cards, like playing, also divided into four suits – Cups, Wands, Swords and Pentacles. In each suit, in addition to the numbers 2 to 10, there are "pictures" - jacks, Riders, Queens, Kings and Aces. There are more than hundreds of variations of cards Tarot – Tarot Aleister Crowley Tarot Thoth, Tarot of the Doors and Tarot Era of Aquarius Tarot of the Gnomes, and Tarot of the Elves. They are not only decoration of the minor Arcana, but the symbols that the artist has invested in the major Arcana. It is assumed that the deck Ryder - white, for example, is universal, but in Tarot of the Gnomes preferred to do the hands on issues related to business Finance career.If you are seriously interested in Tarot, the first deck should be chosen as the first love in my heart. Trying to feel a metaphysical connection between you and the cards.
2
Prepare Tarot to work. The cards began to "tell the truth" you need to clean them up and configure for joint operation. It is recommended to wrap them together with a quartz crystal, such as crystal ball, a black silk cloth and put under the pillow on which you sleep. Thus, it is assumed you don't put them in charge of energy, received from other people and, in the dream, you will find inner harmony with "his" deck.
3
Review the meanings of the cards. All cards have two values in a supportive, straight position and in an unfavourable, turned upside down. Cards Older Arkan complex there are ambiguous interpretations. Cards of the minor Arcana serve more to clarify the situation, so their values are more common. Pentacles (Coins, Denarii) denote the elements of Earth, Cups (Bowls) - Water, Wands – Fire, Swords – Air. Riders can designate young people, Ladies and women of all ages. In different decks of cards may be a different value. So ACE of Wands from different decks can mean trouble, loneliness, family, the paternal relatives, work, and the direction South. Find the value of cards from your deck and for the first time, refer to text.
4
Pick up the balance. There are a variety of card layouts Tarot. They are divided by types – on man and his environment, spiritual development and self-discovery, love and family, health, finances and career, a difficult life situation and General layouts. In each type there are many variations. The scenario explains how to lay out the cards, which one answers which question somehow explains the situation In some classifications includes only the Older maps of Arcanum, in some Arcana shuffle, others are arranged individually. Choose one to start with the balance on the General situation and master it to perfection. Then start learning the other classifications.
5
Mixing cards. Before you start to wonder, focus on the deck and clearly mentally formulate questions you want to answer. If you think the answer to your question is no, don't ask him. Except for a few special deals, shuffles card is always the one who is guessing. The scenario is a ritual and performing it, in this context, the priest. If you need something for extra attitude, a crystal ball, incense, music – use it to reach the desired state. If you are wondering for yourself, it is permissible to ask someone who asks, "poznati" deck left hand. But taking a serious approach to Tarot, consider that it is unnecessary, so as to tune to the questioner must be the one who conducts the ritual, then you are.
6
The unfolding maps. As soon as you started to lay out the cards, do not be distracted. No need to look in any books and Cribs. If a card falls from the deck, it is also necessary to include in the scenario. The most popular way to make a balance of this so-called method of "washing". You spread the cards like a fan upon a table or other surface, face up, and slowly swiping over them with your hands, choose those cards that seem "fit" for the situation.
7
The interpretation of the cards. Making the situation, don't rush to check the meaning of the cards. Listen to your own intuition. Card is just your prompter and guide, don't forget about it.
Please note, what suits dominate the situation?
If in General situation many cards of the major Arcana, we have a large number of fateful events. If a lot of "pictures" of the minor Arcana, these events will engage many people.Only after getting a General idea of the scenario, begin to read the cards in more detail. If you feel that the value of the card does not match your feelings, be guided by your intuition. Don't do one day a lot of hands. It is not a mechanical job. Gad every day, but one or two cards. Record layouts, cards, your interpretation and the events that happened after it. This will help you understand where you made a mistake, and where your intuition "worked" to "excellent."
Useful advice
Do not let the cards "Tarot" to build your life. Not consult with them on every occasion. Tips from the fate it's just hints, not direct instructions.
Is the advice useful?
See also
Присоединяйтесь к нам
New advices