How to fry mushrooms

Roasted mushrooms is a great dish for a holiday table and casual dining. To the same time to prepare you need a relatively little — champignons, unlike other mushrooms, no need to clean and pre-boil. 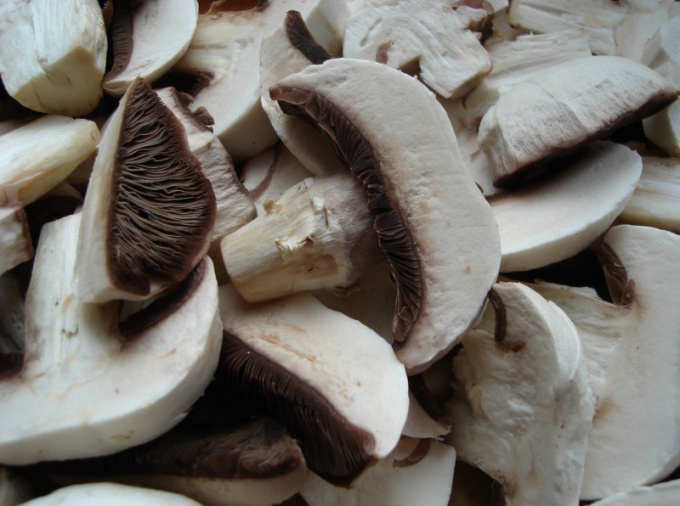 Related articles:
You will need
Instruction
1
Soak fresh mushrooms in cold water. Then rinse them under running water, removing the heads from the dirt and film. Prune the dried severalise the tip of the legs. Dry the mushrooms on a kitchen towel. Choose fresh mushrooms are white or pink. For frying better suited to small fungi, as they are more dense and the moisture they contain less. Instead of fresh you can also fry frozen mushrooms, just a taste they will be less bright. In this case, buy already sliced mushrooms, otherwise they will have to cut after cooking — mushrooms defrost is impossible.
2
Mushrooms cut into plates with a thickness of 5-8 mm. Can thus cut the whole mushroom or gently separate the cap from the legs. Large hats, cut first in half and then chop the slices. Onions peel and coarsely chop.
3
Heat the vegetable oil in a frying pan. For frying mushrooms and onions, use deodorized sunflower or olive oil. Fry the onions until Golden brown and transfer to a bowl. Add in the frying pan more vegetable oil and lay the chopped mushrooms in small portions. Fry the mushrooms until, until it boils away the resulting mushroom juice. Don't forget to stir constantly.
4
Put fried onion in the pan with the mushrooms. Add salt and stir in a little sugar. If desired, add spices. But don't overdo it with the seasonings — the taste and aroma of grilled mushroom is good in itself. Mix all the ingredients. Fry the mushrooms until Golden brown. Put a small piece of butter, stir. A minute later the fire off and cover skillet. Roasted mushrooms are ready.
5
Serve mushrooms as a separate dish, for example, with baked or boiled vegetables, pasta, rice. Or, conversely, as a side dish to grilled meat, poultry.
Is the advice useful?
See also
Присоединяйтесь к нам
New advices