How to choose the right steamer

If you have decided to buy a steamer, before heading to the store, determine what requirements need to answer the device to them was as convenient to use. 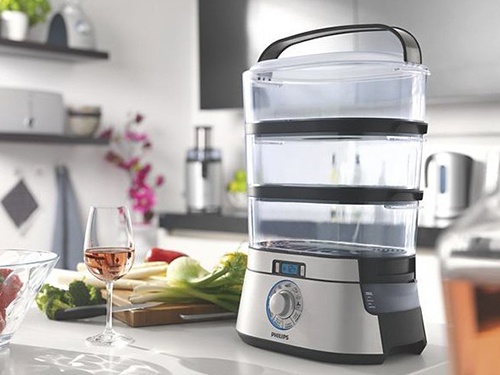 Steamer is a versatile device with which you can cook almost any food: vegetables, fish, meat, and cereal and desserts. In addition, in the steamer to sterilize baby bottles for milk, heat up prepared meals or to freshen up stale bread. The steamer can also be used for canning and frozen food to defrost.

The principle of the double boiler is quite simple: the water in a special container heated to the boiling point and evaporates, steam is supplied to the compartments for products, evenly warming them. The foods are steamed, retain the same weight and volume and not lose the vitamins and nutrients (as, for example, when roasting or cooking). Thus, food remains 70% of the vitamins and minerals necessary for normal functioning of the body.

Before you opt for a particular steamer, you should determine how often you will use it. There are, for example, built-in steamers, which require frequent use. Although, of course, the most common and practical type of steamers are table — they don't take up much space, it is convenient to store in a kitchen cupboard.

When choosing a model the first thing to pay attention to the volume of containers for cooking and power. So, if you have a large family or are you going to cook for a couple of large portions of food, you should choose a steamer with a large number of containers of sufficient volume. Power steamers should be at least 1 kW.

Tanks used in pressure cooker, takes various forms. The most convenient storage for those who invested in each other, they take up less space in the kitchen. But when installed in the steamer you will not be able to arrange them in any order.

I advise you to choose those models of steamers that are equipped with several fairly deep trays for collecting condensate. If the pallet is one, that while cooked foods on several levels, with the upper condensate will drain to the bottom, thereby changing the taste of food.

Must be provided for the automatic shut-off steamer in case of insufficient amount of water. Conveniently, if the steamer has a hole for the gravy water during cooking.

How to run steamers are mechanical and electronic. You should choose according to your preferences. In mechanical it's pretty simple: handle (toggle switch) is set to a mark that indicates a certain period of time, after which the steamer itself shuts down. At the electronic control more opportunities; for example, one of the advantages is the ability to program the device for inclusion in a certain time, then the dish in the steamer will be made to your parish.