Real rye bread has a rather dense, heavy consistency. Not surprisingly, the preference in most cases is given to breads made from wheat flour. However, there are original recipes of delicious black bread that is easy to prepare by using a home bread machine. 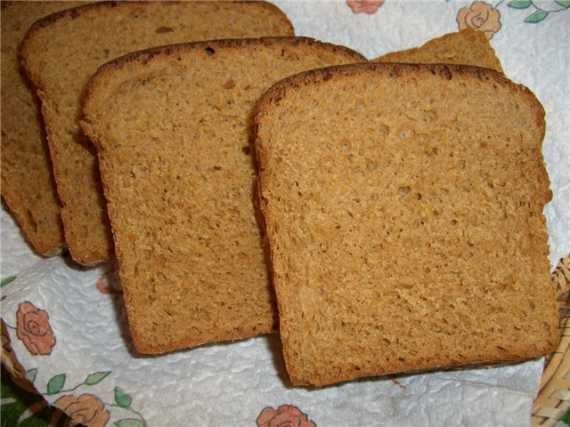 Preparation of black bread in the bread machine perform in "native" mode. In the presence of a special regime for baking wholemeal preferable to choose the average romanesti crust.

In the bowl lay a baking vegetable oil, pour warm boiled water and add yeast. The water temperature should not exceed 40oC. Otherwise, the yeast will die and the dough won't rise. Then add in water, honey and sifted flour.

Then lay rye coarse flour, you do not need to sift. Include a bread machine and after a few minutes after the start of kneading add salt. Lay the salt simultaneously with the other components is undesirable because it slows down the fermentation of yeast, which affects the Wake up test.

Still later, lay pre-soaked raisins. The dough may look like enough liquid at first. However, if the end of the kneading it forms a ball detached from the walls, it's all right, it has acquired the desired consistency. Into batter you need to add a little flour, too tight - water.

During baking do not open the bread maker to prevent the disturbance of the thermal regime. The finished bread should immediately be removed from the device and leave on the table to dry, as products from rye flour quickly dampen.

Black bread in the bread maker with cocoa and coffee

In a bowl lay the sifted rye and wheat flour, salt, cream, honey, cocoa, coffee. Then, in the ingredients make a recess, in which lay the dry yeast and pour vegetable oil, warm water and Apple cider vinegar.

To bake bread in the "native" mode with an average romanescu crust. Black bread is ready take out of bread machine and allow it to cool. Natural honey in the recipe can be replaced with molasses or plain sugar.
Is the advice useful?
See also
Присоединяйтесь к нам
New advices