Why rappers wear their pants

Dropped his pants at rappers – fashion born in poor areas of America. Young inhabitants of the ghetto were forced to wear their older family members clothes that were often the wrong size. A prison ban on the wearing of seat belts, without which the massive pants fell down and didn't stay on the waist, was the cause of the habit of wearing them down. 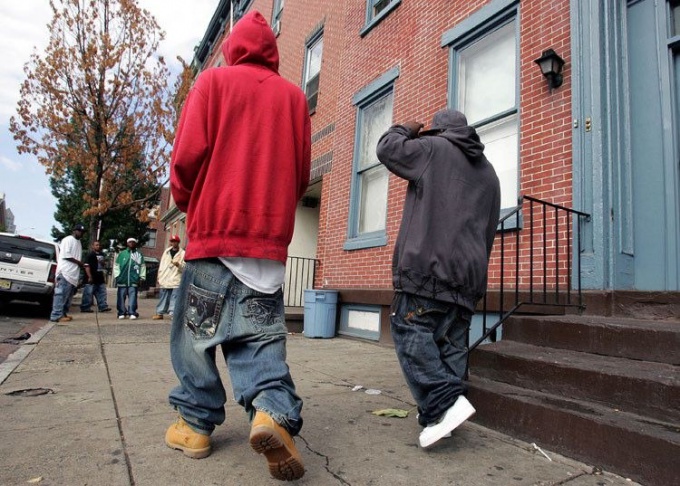 Related articles:
The pioneers of the genre rap as well, and the whole hip-hop culture, are considered the black people in poor areas of America. They first put a bit of rhymed lines, and even managed to make money.

Know a fan of rap music, as well as rap artist in a crowd a snap. The representatives of this subculture prefer the massive sweatshirts, baseball caps with the best quality and wide trousers, often lowered considerably below the waist. And this is not the idea of famous stylists, advancing a mass of such manner of dress during the promotion another star. Poached pants – historically and secure way, born not from a good life.

The style dictated by poverty

In places, the birthplace of the culture of hip-hop, to dress in expensive stores there was none. Wore it would have, not thinking about the combination of colors and the relevance of fashion trends. And the hardest thing was to get a standing baby clothes. If adults could somehow protect things, climbing up walls, basements and attics teenagers are easily turned and so not the best pants and t-shirt in holey rags in a few weeks.

The only way out of the situation when put on a teenager's nothing to pick out something from the wardrobe of older family members. And sizes especially no one was looking. Main thing is not to was not enough, and if too big – not terrible, for growth will be.

Over time, spacious things became familiar, and even growing up, the young men preferred massive t-shirts-robes, preferring their style of "white collar".

Habit from behind bars

Wear baggy pants – a habit from childhood. But the weakened strap, allowing the pants to hang low, exposing the underwear, it's a lovely shade of prison life, which also influenced the development of hip hop style in clothing.

In order to avoid cases of suicide, and to deprive prisoners of the ability to use the belt as a weapon and even the murder weapon, which often happened, prison guards were forbidden to wear belts. Grandparents of the subculture of rap were frequent visitors in prison, poverty often pushes on offense. And the result of the symbiosis of a bad childhood and no less complicated life in adulthood was born in the habit of wearing wide trousers, lowered his their below the waist, and later the habit of black rappers turned into a rampant fashion.
Is the advice useful?
See also
Присоединяйтесь к нам
New advices