How to cook soup of pork

The soup is called nourishing soup that is often prepared in the East. Different cultures have a dish known under the names "sorpa", "chorba", "CORBA". The soup is traditionally cooked in a cauldron on the fire, so the dish had a very interesting taste faintly of smoke. 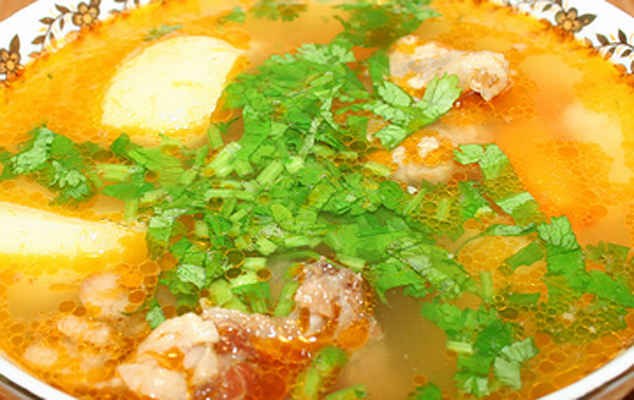 Shurpa – a traditional Oriental dish of high fat content and lots of greenery. To prepare the classic version of the soup is the desired lamb. Often, however, the soup of pork, beef, chicken and fish.

Spices that are recommended to prepare the soup: cumin, red pepper, black pepper, Basil. In some regions in the soup add the quinces, apples, plums and apricots.

The broth for the soup is better to prepare in advance, using the pork bone. The broth should be transparent, so it definitely should be filtered.

Recipe of soup of pork

Onions cleaned from the husk and shred into strips, fry in vegetable oil until Golden color. Pork cut into small pieces and fry until receipt brown. Then, the meat is mixed with onions and add the carrots, diced, and tomato sauce. Remember that vegetables for soup, slice fairly coarsely, otherwise the dish will be like a normal soup.

All the ingredients continue to cook 5-6 minutes, stirring occasionally. Prepared ingredients put in a pot with a false bottom or kettle and pour meat broth. Put the pan on a high heat and bring the broth to a boil. During this time, peel potatoes and cut into small cubes. Once the soup comes to a boil, add potatoes, salt and spices to taste.

Cooking soup pork continue another 20-25 minutes, until, until soft potatoes. For a couple of minutes before cooking you can add in the cauldron, 2-3 Bay leaves, lending a piquant flavor of Oriental dish, and whole sprigs of parsley. Before serving sprigs of greenery must be removed from the cauldron. Ready soup sprinkled with fresh chopped parsley or cilantro.

There is an option of cooking the soup without pre-roasting of meat, kaynatma. In this case, from it is prepared broth, carefully skimming. When the meat is ready, add the fried vegetables. However, the broth in this soup often turns murky.
Is the advice useful?
Подписывайтесь на наш канал