What age child can mushroom soup

Experts say that the mushroom soup can offer a child for the first time at the age of 7-8 years. Better if the mushrooms will be mushrooms, and the soup is vegetable, mushroom diluted broth. After all mushroom dishes are "heavy" in digestion. 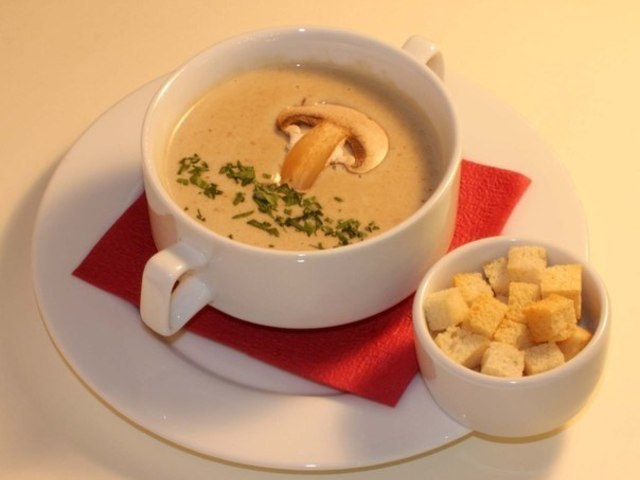 Related articles:
Pediatricians quite often ascertain the facts of mushroom poisoning of children of preschool age, and it is not even in their virulence. To talk about the final formation of a child's digestive system by the age of eight, and even at this age to withstand different kinds of intoxications child's body is very difficult.

Mushrooms in the child's diet: pros and cons

It is difficult to challenge the use of mushrooms, because they really are a source of vegetable protein, fiber, vitamins and minerals. Potassium, calcium, phosphorus, iron, magnesium, sodium – it's not the whole list of nutrients in the mushrooms. The quantity and quality of minerals contained in the composition of the mushrooms, scientists liken them to fruit, protein allows the fungi to replace the nutrition of meat, carbohydrates and vegetables. Substances such as beta-glucans and melanin have a positive effect on the immune system and prevent the occurrence of malignant tumors.

However, in order to reach the valuable composition of fungi, the digestive system has to work hard. The difficulty of assimilation of this product lies in the presence of a substance – fungin. The chemical composition of fungia similar to chitin, which is part of the carapace of crayfish, crabs, snails and some insects. This task is sometimes not easy even for an adult body, and children of preschool age is not enough in the stomach necessary enzymes. Dietary fiber of mushrooms also have a rough structure that complicates their assimilation of the child's body.

Besides the spongy structure of the fungi is often the texture that absorbs toxins from the environment. Alas, the state of forests today is poor. Even if parents decided to feed their child mushroom soup, it is best to cook it out of the forest representatives, and from greenhouse mushrooms or oyster.

The optimal age when you can feed the baby the mushroom soup is 7-8 years. Some parents at your own risk starting at about five years, but in this case, in any case it is impossible to offer a soup cooked for the whole family. First life toddler mushroom soup should contain no mushrooms themselves, but only their broth with a set of familiar vegetables. It can be a soup, besides the mushroom broth to make it necessary to dilute by half with water. The mushroom flavor is so strong that it will attract the child's attention to a new dish.

You can gradually introduce in children's diet of chopped mushrooms, but nutritionists recommend to add in the cream of mushroom soup. They will make the first dish a more delicate taste and will facilitate its digestion. I must say that not all mushrooms are suitable for baby food. Let's start with the mushrooms since they contain toxins and are considered easier in terms of learning. It is important not to rush things and for the first time to offer a child a small portion, after watching his reaction. Even if everything is in order, mushroom soup children are not encouraged to give more than 1 time in 2 - 3 weeks.
Is the advice useful?
Подписывайтесь на наш канал