Why the poppy is a drug

Poppy flower symbolizes the feminine charm. Poppy field is also very beautiful in the sunlight. People use poppy seeds in food, by adding it in bakery products. However, people believe that the poppy contains narcotic substances. 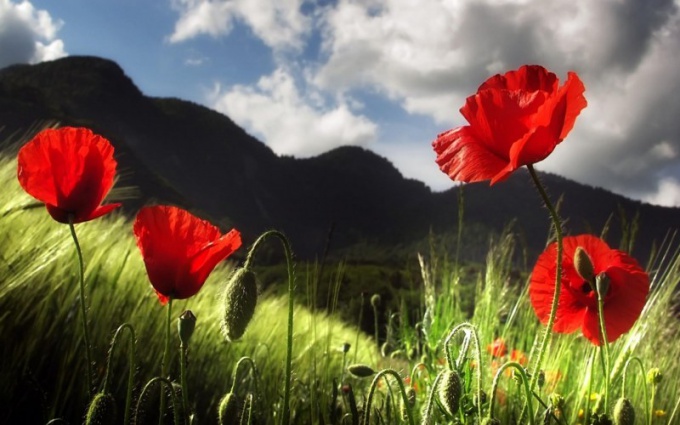 Is Maca a drug?

The poppy, which people consume, in itself the drug is not. The poppy plant contains the seeds (still referred to as food poppy) and poppy straw (the rest of the flower). Poppy straw as food not drink. This indicates that the content in this part of the plant drugs.

Unripe pods of the opium poppy contains opium. It looks like thickened latex. Opium is used in medicines, and in the heroin. Drug is the opium contained in poppy straw. Therefore, it is forbidden to illegally grow on its territory a large number of poppy plants.

The properties of the poppy

Mak – really controversial plant. On one side is a beautiful flower that attracts their appearance, pleasing to the eye. On the other hand, the poppy, contains a juice with drugs. Manually from unripe poppy capsules are easy to obtain opium. Subsequently, the opium is processed into morphine. Morphine – a substance that contains many sleep-inducing drugs, pain drugs and drugs. This drew attention to the poppy in antiquity.

Many Eastern countries have promoted opium Smoking. The people of the Eastern countries believed that, so they found an alternative to alcohol. Because Muslim religion forbids them to drink alcohol. In the 19th century was war, later called "opium". In those days, China has banned the import of opium into the country. England, by contrast, wanted to bring such a product because he was carrying a huge profit. The war ended in result of the defeat of the Chinese.

Growing poppy seeds can be observed among the grasses. During maturation of the plant box breaks very sharply, causing the seeds can fly a decent distance. But sometimes it happens that the seeds fall out of the box flower before maturation. Of them receive technical oil. Poppy seeds are widely used in the confectionery sector.

The use of Maca for medicinal purposes

In ancient times, the poppy used to make opium, which is actively used for medical purposes. The ancient Egyptians with drugs containing poppy was treated for insomnia. Such an application of popular Mac, and today. In modern medicines contain a milky juice of a poppy, extracted from the immature bolls. Russia's ban on poppy cultivation imposed in 2004. This law covers all types of Mac, where there are drugs. The only plant species that contains no drugs – Alpine poppy.
Is the advice useful?
See also
Присоединяйтесь к нам
New advices