As there is a tornado

Tornado – huge spinning vortex of sand and dust – a unique natural phenomenon. For years, scientists could not determine its nature, and only with the advent of high-speed cameras, it became possible to describe the process of formation of tornadoes. 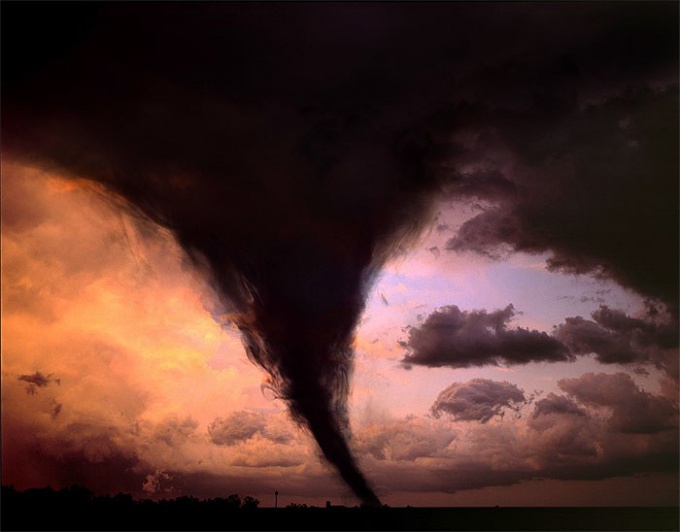 Related articles:
A tornado is a vortex, which consists of air, dust, sand. The whole mass is rotating with great speed and rises from the ground to the cloud, connecting them with each other. Visually, the tornado like a trunk.

The formation of the funnel

Say there is no such point on Earth, wherever they may have formed a tornado, after years of observations, scientists recorded the funnel on all continents, in all climatic zones. Tornadoes may appear above the sea, and over land. They are particularly frequent during the hot and humid weather. Moreover, the presence of clouds is not necessarily, often the birth of tornadoes were observed under a clear sky, although thunderstorms and heavy rain the satellite tornado.

In fact, the whirlwind is a pump that sucks in and lifts the cloud of different objects, sometimes very cumbersome. And transports them for miles.

A tornado consists of a funnel (vortex moving in a spiral) and the walls (the air inside the walls is moving, sometimes at speeds up to 250 meters per second). Just in the walls and climb up objects, and sometimes animals caught in the tornado.

The birth of the funnel are not understood completely, it is believed that it occurs during the collision of the opposing fronts, some of them were wet and cold, and the second dry and hot. One is heavier it falls inside the funnel of the future and the second is lighter, it envelops the bottom. As a result it creates less movement of warm air masses from the periphery to the center, formed a non-uniform column which due to the constant rotation of the globe too zakruchivaetsya.

For the formation of a tornado is enough, usually several minutes. It is worth noting that his limited minutes, but observers are aware of cases where the tornado stayed a few hours, causing a unique devastating blow.

The path of the tornado size is not clear - from 20-40 meters to several hundred kilometers. Moreover, the available in the way of a funnel of forests, lakes, hills and mountains is not a barrier.

Characteristic for this natural anomaly even jumping: tornado some time moving on the ground, then rises into the air and flying without touching the ground. Then again in contact with the ground, and at this moment happens the most terrible destruction. In the whirlwind of fall not only small objects but also animals, cars, houses and even people.

In Russia under the observation of the tornadoes were allocated areas and areas in which are recorded their most frequent appearance: the Volga region, the Urals, Siberia and the coast of the Black, Azov and Baltic seas. It is worth noting that the tornado, which arose on the sea, often goes on the land, however, only increases its power. On average, 10 years in Russia is formed of 20-30 tornadoes. Many of them leave behind disastrous consequences. For example, a tornado that occurred in Ivanovo, destroyed more than 600 houses, 20 schools and kindergartens, 600 summer houses, killed 20 people, injured more than 500.

Despite the efforts of researchers of this phenomenon, to predict the time and place of the next appearance of a tornado is almost impossible.
Is the advice useful?
Подписывайтесь на наш канал