Than to smear the cake that it was brilliant

Lush and ruddy pies with a nice gloss – the pride of every housewife. To pies turned out not only delicious, but also appetizing, it is necessary to cover their crust with glaze. Cakes to grease with glaze before baking, during baking and after baking. 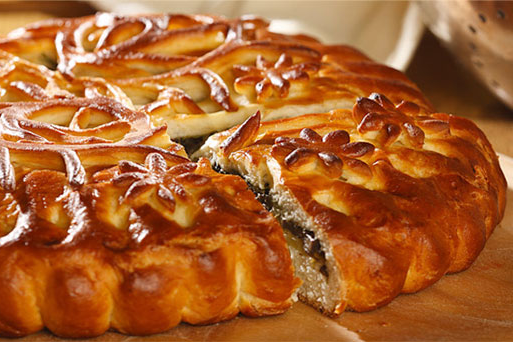 Related articles:
To have cake appeared appetizing glossy crust, it needs oil protein glaze, oil glaze or a sweet syrup. Before baking or during baking in pies is better to put the icing on milk and eggs. After baking the surface of the warm cakes can be lubricated with oil or sweet syrup.

Pies, greased lightly with beaten egg, make a tasty, Golden brown and bright luster. An icing made of powdered egg yolks gives the cake a distinct colour, of the whole egg (yolk and albumen) – the average color of whipped egg white – a slight blush.

Professionals suggest to obtain a shiny Golden crust mix 1 egg white with 1 tablespoon water. This glaze is best suited for savory pies. But for sweet pastries, it is recommended to use the classic grease, which consists of 1 egg yolk, 1 tablespoon of water or oil and 1 tablespoon of sugar. Classic frosting will give the cake a Golden glow.

If grease pie milk, its luster is not as bright as when using an egg glaze, and blush not so rich, but the crust becomes soft. Below the pie is lightly browned, it is necessary to dissolve a little sugar in milk or mashed egg yolk. Protein frosting should be applied to the cake before or during baking.

On glaze of butter, you can say the same thing about milk glaze: it softens the crust of the pie and gives it a light gloss. If the butter add the mashed yolks, the crust will get soft at the same time, rosy and shiny. Butter can be replaced with sunflower or olive oil, which will give the cake a light, dull gloss. The crust of this pie will be too soft.

If you cover the pies with oil glaze before or during baking, the crust will be bright and soft. To obtain a Shine with oil glaze should be applied to the pies after baking. Some Housewives smeared the pies before baking and after it, while the crust from the pies is bright, soft and shiny.

Pies to gleam like patent leather, you need to dissolve in warm water a little sugar or sugar powder and apply the resulting solution on the surface of the still warm pastries. When the glaze dries, the crust of the cake will sparkle with appetizing gloss.

Some Housewives substitute sweetened water sugar syrup. To do this, they dissolve 2-3 tablespoons of sugar in the same quantity of water or milk, put on fire and boil for 1-2 minutes until light thick. The resulting syrup is used to give Shine sweet cakes, scones and fruit muffins. For flavor in the frosting, you can add rose water.

Sugar syrup you can substitute honey syrup. To prepare this syrup should be thoroughly dissolve the honey in a small amount of warm water and smear the resulting solution surface of the warm cakes. Honey is traditionally used to give the cake a nice Shine and flavor. It must be used slowly combining only with sweet cakes and pies.
Is the advice useful?
See also
Подписывайтесь на наш канал