What is the nose needs to be a cat

It is known that in dogs the temperature and moisture of the nose is directly dependent on the state of their health. Not everyone is aware of the fact that felines color, temperature, and dryness of nasal mirrors also is an indicator of the condition of the body. 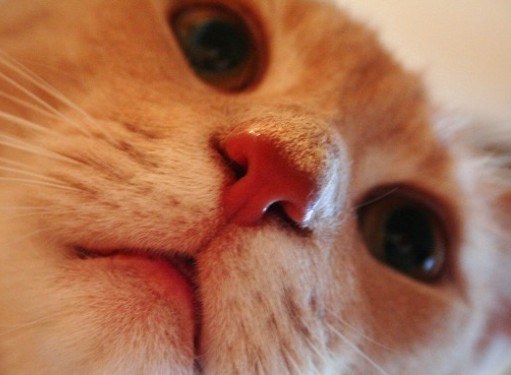 Related articles:
Domestic cats sense of smell is about 15 times sharper than humans. This alone explains how important a clean and healthy nose of the animal for its effective interaction with the environment. In addition, some characteristics of appearance of cat's nose and its temperature can be determined that the animal is sick.

What should be the nose of a healthy cat?

Normal this pet - clean, cool, smooth and slightly damp nose. But do not panic in case if you discovered that your cat's nose is warm and dry. If the animal is awake, nervous or, on the contrary, some time was engaged in active play, the tip of its nose is heated and becomes dry in these conditions it is a kind of norm. If after some time the nose of the cat is hot and rough, you should measure the temperature of the animal, if it is raised, it is possible that your pet is ill and should be seen by a veterinarian.

Excessively cold nose of a cat should also make to guard his master. If in addition the color of the nose becomes noticeably paler than usual, such a temperature decrease could indicate poisoning, shock or systemic disease cat. In addition, excessively cold to the touch nose can mean that the cat suffered from severe hypothermia.

What does the color of the cat's nose?

Initially the pigmentation of the nose of the cat depends on the color of the animal. In most cases it is painted in the same color as the hair on the snout of the animal, but a few shades darker. Some of the cats on the nose there are the so-called "moles" - spots that may be more or less noticeable. With age, the skin on the nose and on the paws of the animal may be darker – this is normal.

Of course, if your pet's nose is dark gray or black, you can hardly judge the condition of the animal to change its color. However, in cats with pale pink noses discoloration of this part of the muzzle allows you to diagnose any deviation from the norm. For example, bluish tinge to the skin on the nose of the animal may indicate a lack of oxygen or pathology of the cardiovascular system. Redness of the nose should make a careful owner to suspect a mechanical trauma to the surface and can also be a consequence of too long exposure to the sun or a symptom of Allergy. Finally, the yellowish hue of nose – a sign of pathology of the liver or kidney of a cat.
Is the advice useful?
See also
Присоединяйтесь к нам
New advices