Can Smoking woman to bear a healthy child

Women who smoke at the planning stage of pregnancy recommend to refuse from harmful habits. It is more difficult to get pregnant, as the nicotine inhibits the maturation of oocytes are more likely to have miscarriages, children born with deformities and pathologies. All risks increase by about a third, so a Smoking woman is less likely to give birth to a healthy baby. 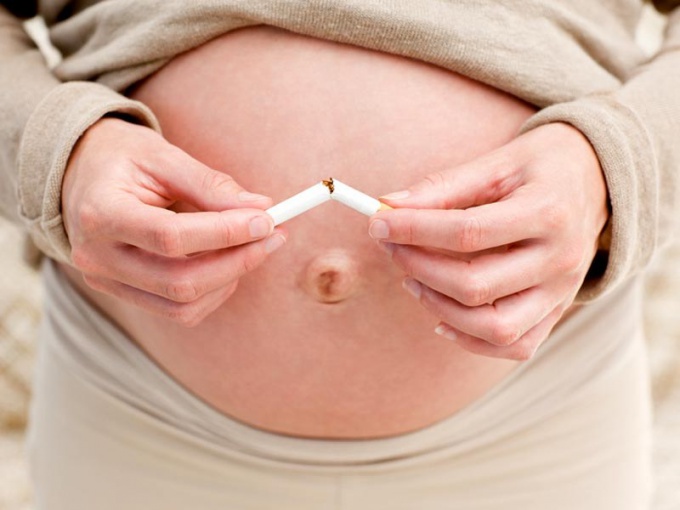 Smoking in the first trimester of pregnancy

The most dangerous Smoking in the first trimester of pregnancy, when there is a bookmark of organs and systems. If the embryo is formed without serious pathologies, and avoid its rejection, the effects of Smoking can have an impact in 5-6 years. There may be problems with the nervous system, it is less plodding, restless. Often these children fall behind in school and need extra lessons. Every fifth child dies in utero because of maternal Smoking. That is, 20% of abortions, including late-term, is due to Smoking.

The negative impact of nicotine during the second trimester of pregnancy

If the child develops no defects and the ultrasound confirmed it, we can say that mother luck. The older the fruit, the less negative impact it has nicotine. All systems and organs are already formed, the child is only growing. Begins to suffer the placenta, it no longer provides proper nutrition, becomes thinner, there are areas of dead tissue. The child develops chronic hypoxia, receives less nutrients, and as a result doctors diagnose the delay of fetal development. Of course modern drugs and treatment methods minimize the harm from Smoking, but they are not always effective.

During pregnancy there is a risk of premature birth, water shortage and the weakness of labor. Although these conditions are pathologies of pregnancy, the baby may also suffer. With the pronounced water scarcity, for example, often bend the bones of the fetus. In the third trimester, the probability of late gestosis, which could lead to placental abruption, emergency delivery and intrauterine fetal death. Complications in childbirth occur 2 times more often in Smoking women is worse shrinking uterus are more likely to have bleeding in childbirth and after.

The negative effects after birth

If the child develops according to the norms, gaining weight, not suffering from his physical and mental development, Smoking mothers is still worth to be more attentive to the child. It is necessary to exert maximum effort to minimize the potential harm of nicotine in the future. To pay more attention to the health of the child, his development, training techniques and healthy lifestyle in General.

Speaking about the potential risks, obstetricians consider them in the aggregate. Healthy Smoking, taking vitamins is more likely to have a healthy baby than women smokers with abnormalities of internal organs, neglecting proper nutrition and have other risks.

When Smoking 3-4 cigarettes a day the probability of having a healthy baby ─ 80% in women who smoke 6-10 cigarettes a day, healthy children are born in 60% of cases, intense smokers the risk of having an affected child about 90%.
Is the advice useful?
Подписывайтесь на наш канал