Who plays the bartender Kostya in the TV series "Kitchen"

In addition to regular meetings with the popularly favourite Dmitri Nazarov and Dmitry Nagiyev, the TV series "Kitchen" has opened for a wide range of audiences new names. One of the most popular characters was the bartender Kostya Anisimov, played a young actor Viktor Horinyak. 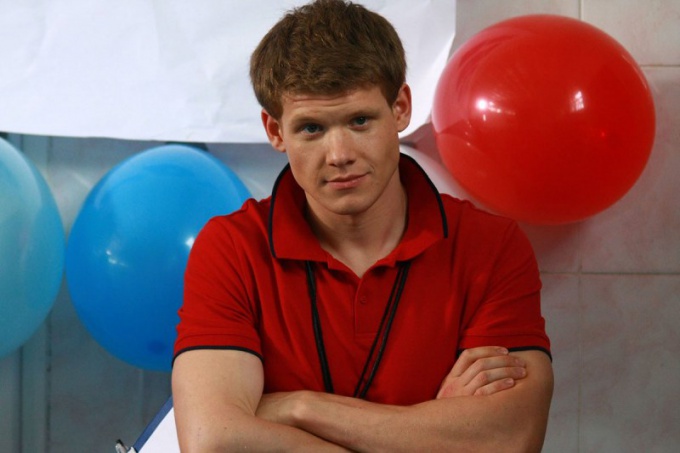 Victor in the TV series "Kitchen"

The role of the Bartender's Bones Anisimov brought the actor to Victro Horinyak popularity, it began to learn on the street. Before filming began, the actor went to a special course, where he was taught to make cocktails. But to show the craftsmanship in the frame rarely works. In the story the hero, Victor basically wiping glasses and the bar, making coffee, except that the shaker can shake with a professional look.

Victor studied at the theater Studio of the Moscow art theatre. From the second year started to play on the stage. After graduating in 2011, he was invited in the troupe of the Moscow Art Theatre named after Chekhov. Played in performances "the Master and Margarita", "the Pickwick club", "the Threepenny Opera", etc. Your best theatrical work considers the role in performances of "Crime and punishment" and "Man-pillow".

On TV, Victor appeared in 2007, it was an episode in the TV series "Law and order". Then there were small roles in the TV series "Stroybat", "Univer", "Night swallows", "strange wings". In 2012, Victor adopted the role of a bartender in Bones the TV series "Kitchen". Parallel to the filming of "Kitchen", Horinyak managed to take part in projects of "Kuprin", "Love not a potato" and "Thaw". In 2014 Victor has played a major role in the mini-series on the First channel "shell-Shocked, or swimming lessons freestyle". To authentically look like a professional swimmer, the actor has lost 16 kg.

Numerous fans of charismatic bartender Bone can not hope for reciprocity. The heart of the artist Viktor Horinyak has long been firmly occupied. With his beloved Olga, Victor met, while still living in his native Minusinsk of Krasnoyarsk Krai, he was only 16 years old. Guy long and persistently sought the attention of girls. After school, the way the lovers parted – Victor went to conquer theater stage capital, and Olya remained in Krasnoyarsk to study to be a child psychologist. It seemed that the abundance of beauties in the theatre had to turn the head of the young student, but Victor was true to his first love. After studying in Krasnoyarsk, Olga moved to the beloved in Moscow.

At the end of 2012, the couple got married. Perhaps the wedding has contributed to the imminent completion of the family in the summer of Victor and Olga became the parents of a son, Ivan. Viktor impossible to meet for get-togethers and parties. Every free moment he tries to spend with his family. He enjoyed himself bathing the baby and changing his diapers. Sees the wife as his best friend. Victor is the impression of a Mature and sensible men, despite the fact that in 2014, he was only 24 years old.
Is the advice useful?
Присоединяйтесь к нам
New advices