Is it possible to sleep in a hammock

Sleeping in a hammock is not only possible, but also useful. This dream is good because the body adopts the most comfortable and healthy position. At the same time for a healthy night's sleep is important to choose the right hammock. 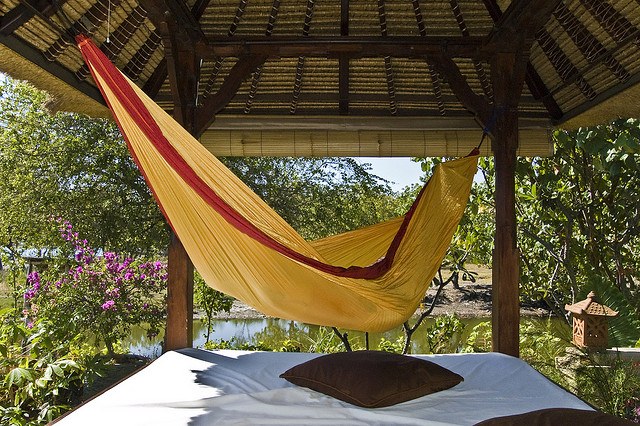 Related articles:
Use hammocks instead of beds to admit only the beginning of modern science as useful for health. But the universal practice about the benefits of sleeping in a hammock is known for a very long time.

In some cultures, for example, in Central and South America, hammocks were an integral part of people's lives for many centuries. In most cases the inhabitants of these areas used to sleeping this way since childhood. And it was not so much due to poverty or necessity, and with the advantages that you can get from such a dream.

Why some people can't sleep in a hammock

The reasons are that some people can't sleep in a hammock for two. First, it is an uncomfortable posture. Secondly, it's a bad hammock.

Many people are accustomed to sleep on beds, often turning on its side. Meanwhile, the optimal body position for healthy sleep on your back, with your head elevated. In a hammock you have to sleep that way.

For strong and healthy sleep you should choose a special hammock. The market sold a lot of low-quality hammocks. Popular for a long time was woven hammocks with wooden beams. In addition, they on body scars, they turn together with the person. These hammocks are unsuitable for sleeping. To sleep was good, you should choose a hammock that isn't turning and not spinning. Good to sleep in a hammock made of fabric, quite wide and there are no wooden slats. Sleep in this hammock resembles a stay in a cozy cocoon.

To hang a hammock for sleeping should be uniform and not too pull. To take a horizontal body position, needs to lie down in the hammock at the correct angle. For this we need to take feet to the edge of the hammock by about 20-30 cm, then straighten the upper body and legs. This body position slightly on the diagonal – guarantees the absence of a large deflection of the back. Legs and head will be slightly raised.

The advantages of sleeping in a hammock

The first advantage of sleeping in a hammock is a comfortable body position. Sleep on back with head slightly elevated is helpful.

The second advantage – the hammock is swinging, quickly lulling. In addition, the sleep becomes deeper, and this means that improve thought processes and memory.

Another advantage of a hammock is that it doesn't crush the body. Therefore the person sleeping in the hammock does not feel uncomfortable. Compared to the hammock flat surface of the bed causes some inconvenience, because of what the sleeper is forced to toss and turn while sleeping.

Finally, according to some studies, hammock and treats insomnia.
Is the advice useful?
Подписывайтесь на наш канал