Why not growing hydrangea

For the first acquaintance with hydrangeas, you should choose hardy varieties that are designed for the climate of this region. Information about what varieties are best suited usually find out from the sellers. 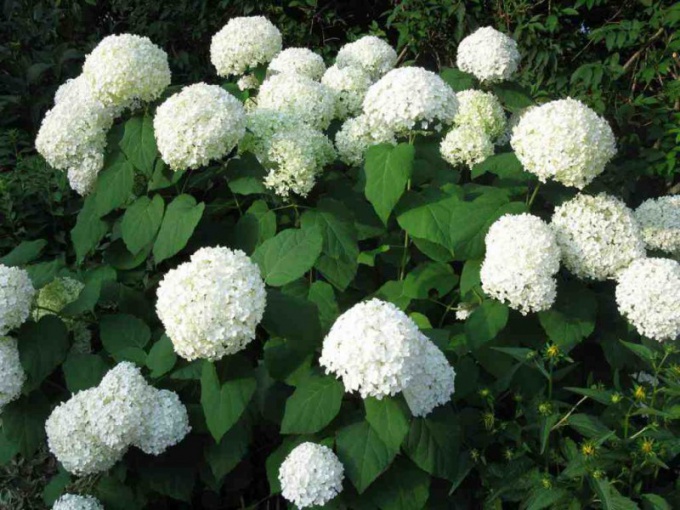 The cause of death of hydrangeas in the garden

In most cases, the cause of death of flowers is soil whose properties for hydrangeas inappropriate and unfavorable. It can be black earth, manure and humus or alkaline soil. In alkaline soils, as a rule, a lot of lime, but little iron, and it causes at the initial stage of chlorosis of leaves and then plant death. You can improve the condition of hydrangeas, feeding them with a solution of ferrous sulfate based on 5-6 grams per bucket of water.

Also the cause of death may become permanent watering hard water. You need to use for irrigation pooled water.

When planting hydrangea from the container to a new location should not be trimmed of its roots. Pruning the roots is practised at many plants, after the root system develops much better, but for finicky hydrangeas this method is too severe, she may even die. Best carefully remove plant from container and plant without making earthen no changes since transplant for this plant is in itself a great stress.

Not purchased seedlings of hydrangea stored for long periods without planting in a permanent place. And in stores such seedlings is better not to buy - most likely, it will die. Hydrangea not tolerate prolonged drought and frequent dragging from place to place. Purchase only plants, soil which is moist, leaves and flowers are not damaged, and transplanted as soon as possible.

Bought hydrangea used to drip watering and constant fertilizing, and if the usual mode will be changed too dramatically, the plant may also be ill. So the first month you should gradually increase the time between waterings and be sure to fertilize, even if for other plants is not practiced. To the new regime hydrangea gets used about 1.5 - 2 months.

Why hydrangea refuses to bloom

Hortense often refuses to release new caps colors because of lack of irrigation. Hydrangea loves frequent watering and does not tolerate drought. The reason may be weakened the roots of plants, for example, after transplantation. In this case, the hydrangea will bloom in about a month.

If not in bloom, the old Bush, the cause may be improper trimming. Old shrubs form the new flower hats only at the end of last year's shoots, and if you have made trim for splendor, flowers can be expected only next year.

The reason for the lack of flowers can be bad acclimatization. Currently, hydrangea popular, and in the pursuit of profit many offer varieties that short summer the Northern strip of not permitting to lay the flower buds. For acclimatization and adaptation of these shrubs will need more than a dozen years, and while it is possible to grow them in the greenhouse - where they will likely flourish in time.
Is the advice useful?
See also
Присоединяйтесь к нам
New advices