What is the pin

The pin is a site that is designed to move the swivel wheels of the vehicle within the established steering limitations. In its core, kingpin is a spherical joint. 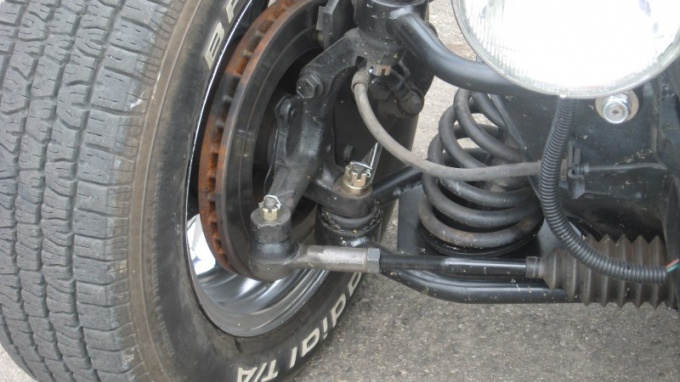 Related articles:
In the modern sense of the pin is a structural element of the rotary wheel mechanism designed to impart the required degrees of freedom. This concept brings together a variety of design mechanisms that are United by a common purpose. In one form or another, the pin is part of almost all wheeled vehicles.

The development of the design of pins

Originally the pin was a pivot that was enshrined in the General rotary axis of the front pair of wheels of horse-drawn carriage. When the first car under the tongue understand the individual rotary axis, on which were planted the wheel with a pair of roller bearings.

Since the mid-twentieth century, the traditional design of the pivot mechanism for rotating automobile wheels replaced spherical and semi-spherical joints. This decision gave the opportunity to simplify the design of the pin, allowing due to the presence of one element to provide rotation of the wheel and its turning. Turning the wheel is carried out in accordance with the control signal of the driver is carried out through the steering gear.

Use on modern cars

Modern spherical joints pivot parts have a high reliability and ability for a long time to work in the intensive mode without intermediate lubrication. Pins of this design has been widely used as suspension vehicles and capacity. They are used in steering mechanisms of trucks, pickups and parts SUVs. Driving characteristics depend on such characteristics of the pin as the longitudinal and transverse tilt angles.

The appearance of appreciable backlash in the pivot node pair requires replacement. Cause of wear can be riding on the roads with poor or damaged coating, or lack of lubricant leakage, the imbalance of the wheels. The pin for the replacement comes in the form of separate Assembly units, the construction of which is individual to each car. In the contact cavity of the pin is laid grease.

In cars new designs used suspension type "MacPherson strut" design which allows the wheels to perform a rotary movement due to the mobility of the strut. In this case, the pivot is called the imaginary axis of a wheel, around which it rotates by the control signal of the driver.
Is the advice useful?
See also
Присоединяйтесь к нам
New advices