The power of the motor and its stable performance is directly related to the condition of piston rings. Therefore, the timely replacement of these important elements will extend the life of the engine and, at least, restore it to factory settings. 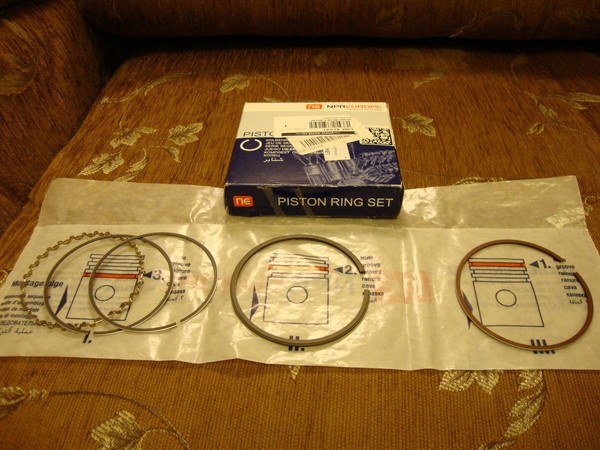 Related articles:
The task of the piston rings is to seal the piston in the implementation of the compression stroke. Rings installed at the plant in theory should remain operational during the entire period of operation of the engine. However, in practice there is often a need for early replacement of rings, connected, for example, with particularly harsh operating conditions of the car.

Today, more than just a common design that includes 3 separate rings, each of which solves its task. The first ring, called the compression, receives the bulk of the load upon ignition of the combustible mixture and is located on the top of the piston. The second compression ring supports the first and solves almost the same problem. The third element piston oil ring consists of 3 parts (the separator in the form of springs, plus a couple extra rings) and do not allow engine oil into the combustion chamber. Some manufacturers offer oil ring, which is a unified whole.

The installation of piston rings

Define a clean place and put new piston rings. Please read the manual which says which side is necessary to put the compression ring (sometimes manufacturers put the information on the packaging). First install the lower oil control ring. If it consists of 3 parts, the first sets the separator; a special tool is not required. Next, mount a couple of extra rings.

The second step is to install the lower compression ring. Take his hands and stretch it slightly above the bottom of the piston to avoid twisting and no bending. Installing a compression element, make sure that it runs freely in the groove. The next step requires a tool – azimutal (something like a pair of pliers on the contrary). With it, stretch the ring over the bottom of the piston set at top groove. Now you need to check the proper positioning of the joints of the rings. Clearances must defend from each other by 120 degrees. However, this figure may be different for clarification read the manual. After all the rings are installed, they must be lubricated with engine oil for better adaptation to the walls of the cylinders.
Is the advice useful?
See also
Присоединяйтесь к нам
New advices