What are the names of all the cervical vertebrae

The cervical spine is one of the five divisions of the spine, which consists of seven vertebrae. Is the most moveable in the body for small loads. In international standards the vertebrae of the cervical spine can be designated as C1 – C7, but among them there are two unique vertebrae, which have their own name. 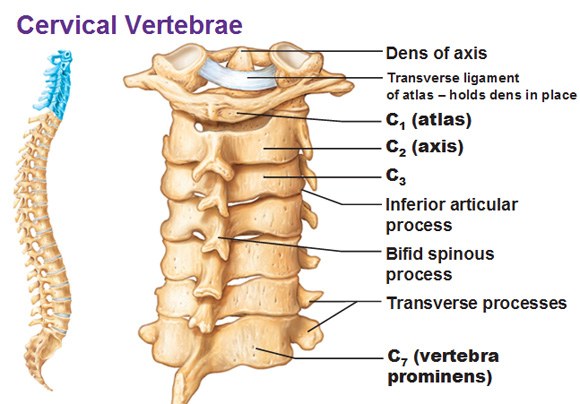 Related articles:
Instruction
1
The first vertebra, C1, called the atlas (atlas). Named in honor of the Titan of Atlanta, who is holding the sky. And if he is holding the skull. In fact, Atlanta is the only link with the rest of the spine. Has no body, and is actually a ring, consisting of two arcs: front and rear, connected by the lateral masses and two side formations. To the occipital hole is attached with the help of the condyles, and below its articular surface is almost flat. On the rear arch has a small depression, which docked tooth of the second vertebra. Is very a vertebral foramen, in the event of abrupt movements and small movements, which can then be followed, no damage to the spinal cord.
2
The second vertebra – C2, is called epistrophe (axis). Unique in that during the formation of the skeleton during the embryonic period, the body of the first vertebra adheres to it, forming the so-called tooth. On the top of the tooth located anterior and posterior articular surfaces, the front connects with the hole on Atlanta, and the rear with its transverse ligament. Around him and moving Atlas with the occipital bone, as if on its axis, so it is called the axis vertebra. The spinous process are very strong and big, much bigger than the rest of the cervical vertebrae.
3
The third, fourth, fifth and sixth vertebrae – C3, C4, C5, C6 have their own names (vertebra cervicalis). In fact, they are no different from each other, so they just call them by ordinal, for example, the fourth vertebra, the sixth vertebra. Since the cervical vertebrae are no large pressures, they are small and have low body, which explains the high probability of injury of the spine. Each of them has a nearly triangular a vertebral foramen, transverse processes have a hole through which passes the vertebral artery. The ends of the transverse processes have two tubercles: front and rear. The anterior tubercle of the sixth vertebra is slightly better developed, so during heavy bleeding it can be pressed against the common carotid artery. Spinous processes of these four vertebrae are relatively short.
4
The seventh vertebra – C7 his name is not, but for small differences in the structure it is called a protruding vertebra (vertebra prominens). As it has a very long spinous process that is easily detectable through the skin, and it is used for counting vertebrae with surveys of patients. Otherwise, its structure is almost completely identical to the previous four vertebrae.
Useful advice
Conditionally emit the occipital part of the skull in part of the cervical vertebrae and is called the "zero" vertebra – C0.
Is the advice useful?
See also
Подписывайтесь на наш канал