Women on diets, I prefer to choose healthy and nutritious cheese with a minimum fat content, as some nutritionists recommend eating a cheese product, fat content not exceeding 5%. Such a cheese is most often sold in expensive grocery stores or big hypermarkets. 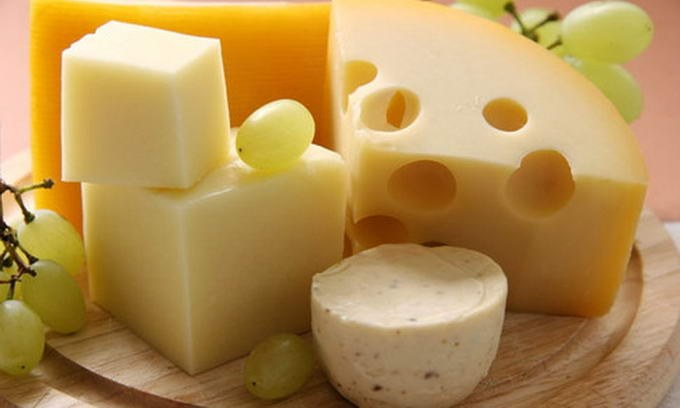 To the cheesem, fat content of which is 5% include brands such as Valio Polar, Grunlander", "Fitness", "homemade Cheese", "Cottage", as well as white cheese (feta) and cheese. Cheese "Chechil" texture similar to Georgian Suluguni cheese, but it is a braid of thick fibrous threads that contain large amounts of salt and are often sold smoked. Low-fat cheese "Grunlander", "Fitness" and Valio Polar contains about 148 calories.

When you purchase low-fat cheeses need to carefully read the packaging because some of them may enter 5% of fat and yogurt.

Easy cheese or feta cheese-Lite is considered a dietary product, in contrast to the usual cheese with a high fat content, it can be easy to add to various salads and eat as a snack. Cheese is a kind of cottage cheese with reduced fat content, which is sold in the form of curd grains, mixed with slightly salted fresh cream. It is usually used as a self-complete dish and is prepared from a granular curd salads with additional vegetables.

Recipe of cheese with 5% fat

If the cheese with a fat content of 5% hard to get, it can be prepared at home. For this you will need 1 kg low fat cottage cheese, a glass of fresh milk, half a teaspoon of baking soda, 1 teaspoon salt, 1 tablespoon of butter and 1 egg. While teaspoons salt and butter may not be entirely complete. The cheese need to put in a pot, cover it preheated the hot milk and cook for ten minutes.

Initially, the curd of milk will give a large amount of fluid – don't worry, as it should be.

The resulting cheese mass is necessary to shift into a sieve and allow excess liquid to drain. Then it has to be put in a bowl and add the butter, egg, baking soda and salt. All the ingredients are thoroughly mixed and boiled again for ten minutes. The mass must be constantly stirred until then, until it thickens and begins to drag. After this mass is laid out in a deep form or a plate greased with olive oil, and pressed down on top. The result is a diet cheese fat content of 5%, which if you want you can add some herbs or cumin, after which it can be consumed with coffee or salads.
Is the advice useful?
Присоединяйтесь к нам
New advices