Boarding pass is a document by which a passenger aircraft may take on Board. Without the boarding pass on the plane no one is allowed. This is usually a standard rectangular piece of paper with rounded corners, but the recent widespread electronic boarding passes printed. 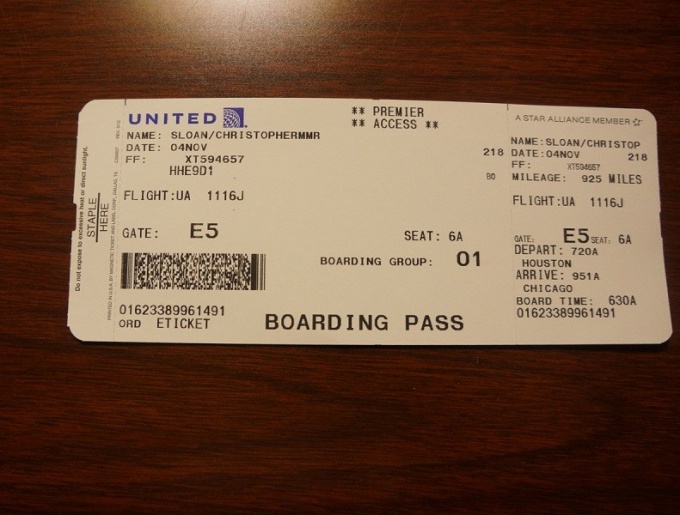 Related articles:
Instruction
1
In the General case, a boarding pass or boarding pass, looks like a rectangle of heavy paper, size is approximately 20 x 8 cm the Form is divided into two parts, the left slightly larger than right. Employees of the airport during the landing off the left part of the boarding pass and the right to leave the passenger.
2
On the boarding pass contains all necessary flight information: airline name, airports of departure and arrival, direction of flight, time of departure, passenger name, seat number and class of service. Also on the boarding pass there is a strip of bar-code that reads a special device – scanner for authentication blank.
3
Boarding passes can differ in design, as many airlines seek to put their merchandise and logos. Sometimes on the other side of the boarding pass advertisements. If the airline does not care about the special style for his stamp, then the form will be provided to the trappings of the corporate style of the airport or it will be a simple sheet of paper without any logos and decorations.
4
There are also e-boarding passes. When the airline is seeking to save on service of passengers to make the plane ticket as possible cheap, she sometimes refuses the issuance of a standard boarding pass. It is often found in low-cost airlines. European budget airlines are asking passengers to themselves to print out their boarding passes that they receive with the purchase of tickets via the Internet, and the Asian be able to issue a boarding pass instead of something like a receipt from the supermarket. Whatever your boarding pass, it still needs to present all the information about the flight and the passenger.
5
There is another type of boarding pass – e -. It need to print at the airport. The company sends e-mail the passenger a message that specifies a coupon code. Or you need to attach the code to the scanner device, or print it in advance at the front Desk.
6
If you are not clear how to obtain a boarding pass (these forms do sometimes quite exotic), then follow the instructions from the airline and feel free to further Refine all the exciting moments at the airport staff.
7
The usual procedure of obtaining the boarding pass as follows. You stand in a queue at reception on the flight (if you're lucky, you even will not), then a staff member checks data from your passport to your program, and then issues you a boarding pass on hand.
8
You can register in counters self check-in, they are available in many major airports. This is possible only if your passport is biometric. Standard biometrics of the Russian passport is somewhat different from the usual, so sometimes the document is not read. This is not a reason to worry, just get a ticket in a General manner at the reception.
Note
Don't lose your boarding pass. If you got it at the airport, and not printed from the computer, recover the lost document is no longer possible.
Is the advice useful?
See also
Показать еще
Подписывайтесь на наш канал