How to fill out wafer rolls

If you have an electric waffle iron, it is important not only to prepare dough for rolls, but also fill them with tasty fillings. There are several ways to prepare the stuffing and fill their waffle cones. 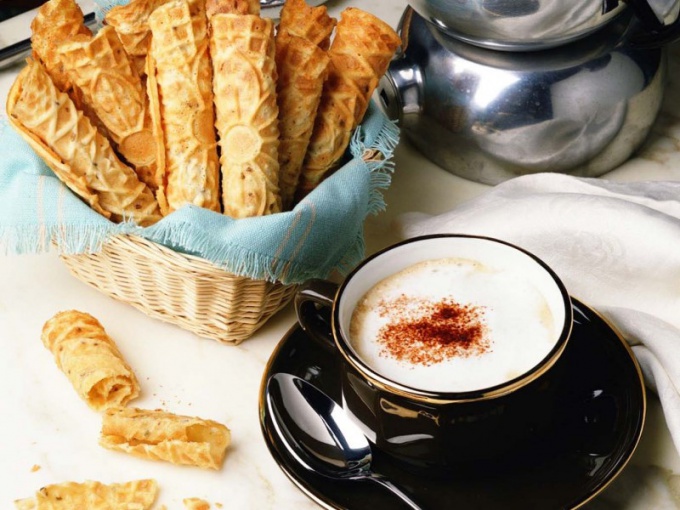 Related articles:
You will need
Instruction
1
Prepare the stuffing. In order to dump wafer rolls, it is necessary, first, to cook a delicious stuffing. You can choose a simple classic version and make it from condensed milk with butter. To do this you must beat with a mixer cream the butter until it forms a viscous white mass. Still whisking, gradually add in the butter sweetened condensed milk. Whip the cream until then, until a homogeneous lush blend that will be your filling.
2
If you want to depart a little from the classics and surprise your family and guests, prepare the custard. To do this, take an egg and separate the yolk from the white. Protein you do not need, so you can put it away in the fridge or throw it away. Mix the egg yolk with milk to homogeneous mass, and then add to this mixture the sugar and vanilla sugar. Mix everything thoroughly and place on low heat. Cook until until the cream thickens – this process usually takes about five minutes. Before use, the cream must be cooled.
3
Stuff the tube in the cooking process. In order to save time, fill with straws directly during preparation, one after the other. Make the cream, take a tablespoon and put it all beside him. Wait until cooked waffle first layer, remove it from the waffle iron and pour batter for making the next seam. Until it is baked through, spread the finished seam filling and gently roll into a tube. Thus, you are going to stuff each tube at a time while preparing the following. Resorting to this method, it is important not to give the future the tube to cool and harden, otherwise you will not be able to roll it – the dough will break and crumble.
4
Use a pastry syringe or cornet. This method of filling tubes filling involves the gradual preparation – first you bake and turn the tube, then fill them with the stuffing. This is useful if you prepare in advance, but want to welcome your guests wafer part remained firm and crispy. In such a situation it is advisable to prepare a basis and to dump her immediately before use, the cream did not have time to soak and soften the wafers. To do this, use the cornet or pastry syringe. Pre-cooked the filling put in your device and squeeze into the tube from two sides so that the middle is left empty.
Note
If you have an electric waffle iron, it is important not only to prepare dough for rolls, but also fill them with tasty fillings. There are several ways to prepare the stuffing and fill their waffle cones.
Is the advice useful?
Подписывайтесь на наш канал