How to play po

Even twenty years ago it would be difficult to find at least one girl who wouldn't know how to play the elastic. Such entertainment at that time was incredibly popular among children aged 5 to 15 years. The girls played in the house and at school at recess and in the yard with friends, and home, pulling a handy material on the chairs. After some time, so much fun has been unjustly forgotten, but now playing the clip again becoming popular. 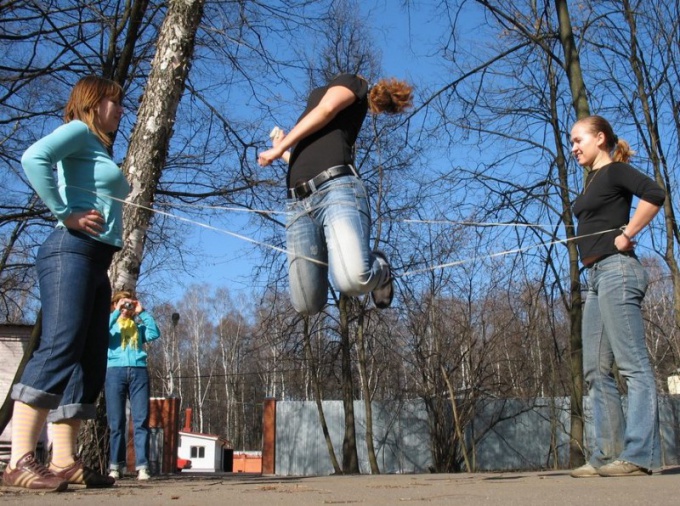 Like all brilliant, the rules of the game in rezinochku very simple. For this fun will require a piece of elastic bands for underwear with a length of 2-4 meters and the participants of the game more than 3 people. Elastic bind, thus forming a closed loop, and stretch the legs of two players. Then the third party starts to make jumps through it.

Possible and this option when playing not three but four people, that is in pairs. In this case the second partner can do the activity instead of the player who committed the error.

The elastic during the game, raise the legs each time getting higher. First, it takes the initial position, i.e., at the level of the ankle. The highest position is the most difficult jump, the belt.

After error-free execution of the exercises at the primary level, the player repeats them on the next. If he makes a mistake when performing exercises, the turn passes to the next player. Thus blundered takes place inside the path clip.

"Birch". Start position: standing sideways to the elastic. Jump over the first one half and then through the second. Do it so that the rubber band between your feet. Jump out for her.

"Pedestrians." Starting position: standing facing the elastic. Jump on it to squeeze each half to the ground with his foot. After that switch legs.

"Step". Starting position: standing facing the elastic. Jump on the near half of the bands so that one leg was under her and the other pinned her to the ground. Jump over to the other half of the clip, changing the position of the feet. Jump out of loop and repeat in the other direction.

"Bow". Starting position: standing facing the elastic. Jump on the near half of the bands so that one leg was under her and the other pinned her to the ground. Then, without lifting the rubber band, jump on the other half, while having legs symmetrically. Jump out beyond the clip.

"Handkerchief". Starting position: standing facing the elastic. Jump to the far half of the bands, pressing it with both feet to the ground. In this near-half must cling to your feet. You jump outside the bands. In another embodiment, in this game you need to jump, and jump over the far half of the gum.

A set of exercises and sequence of their execution in various versions of the game in rezinochku can vary significantly.

The "candy". Starting position: inside twisted like candy wrappers candy, gum. Bounce, allowing the elastic to spin and land feet on both halves.

Variety of exercises can be many. Also may impose additional, the most difficult levels when the elastic is stretched on the height of the neck and underarms. Learning to play the elastic at the elementary level child will have plenty to exercise your imagination, coming up with new and interesting exercises. In addition to the health benefits and weight loss, the game in rezinochku can be a great way to escape from the Internet and find new friends.
Is the advice useful?
See also
Подписывайтесь на наш канал