Eye is a visual organ, by which man receives information about the world. Various adverse factors contribute to impaired vision. Clouding of the lens of the eye is fairly serious and severe disease called cataract. It should be noted that this pathology is dangerous because it can lead to blindness. Therefore it is very important the appearance of unpleasant symptoms in time to see a doctor. 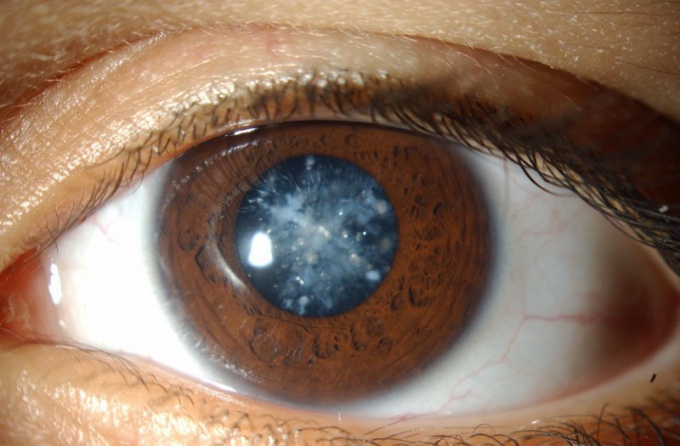 Related articles:
As a rule, cataract is one of the most popular diseases of the lens. To date, the pathology characterized by the clouding of the lens, is common not only among the elderly. In recent years, the age of the disease significantly decreased, and this means that now the risk group also includes people from approximately 45 to 65 years. Over time the disease progresses quite strongly, contributing to the rapid decline in vision due to the increase in the area of dimness.

The fact that the lens has the appearance of a transparent optical lens, which is convex on both sides. He is able to instantly direct the focus, to change shape and therefore eye equally sees at different distances. However, this process is disturbed because of clouding of the lens, whereby it loses its transparency. That's why there is a need as soon as possible to contact the specialist for appointment of the necessary examinations. After all, only a doctor, based on the data, can put or Vice versa to exclude a diagnosis of cataract. It is worth considering that this disease can affect one or both eyes.

Actually causes a great many: disorders in the metabolic processes that take place in the tissues of the lens; slowing of metabolic processes; poor circulation of oxygen in the tissue region. In addition, the development of this pathology can lead to various eye injuries, diabetes, use of hard drugs, hereditary factor. Also, quite often find cataracts in newborns, which can be explained by the presence of dangerous infection in pregnant women (measles, herpes, rubella). There are some common causes that contribute to the emergence of dangerous diseases such as cataracts: obesity, alcohol consumption and Smoking, poor environment, radiation, or ultraviolet irradiation, x-rays.

Unfortunately, cataracts cannot be cured with medicines. Undoubtedly, a doctor can be assigned to certain drops. But the fact that they do not act on the removal of turbidity, but only prevent further worsening of the condition. Thus, cataract can be cured directly with surgical intervention. Before its implementation, the patient must undergo a full examination, which will identify the stage of the cataract, after which the specialist will prescribe a specific type of operation. It is worth considering that in most cases, prompt treatment can completely restore vision.
Is the advice useful?
See also
Присоединяйтесь к нам
New advices