How sperm is formed

Sperm (seed in Greek) is the fluid that is released by males of animals and men during ejaculation (ejaculation). Another name for sperm – ejaculate. It is a viscous and turbid liquid of light gray color. The sperm consists of seed liquid and spermatozoa. 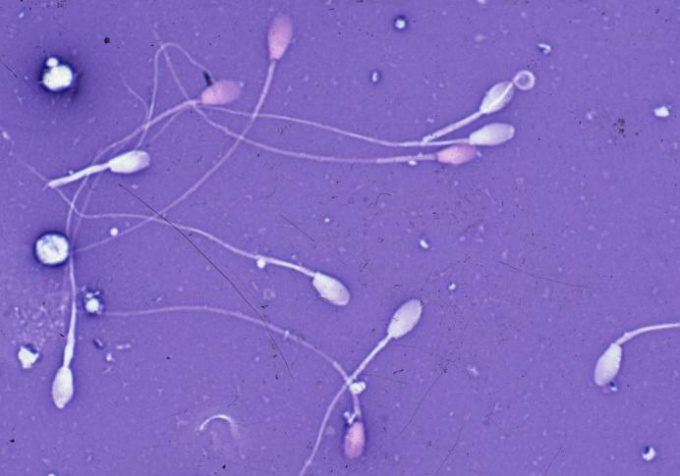 How sperm is formed?

The sperm begins to form in puberty boys, reaching its maximum in adulthood. With age the formation of sperm decreases. Ejaculate contains in its structure many chemical elements and compounds, among which ascorbic acid and citric acid, choline, cholesterol, fructose, Inositol, urea, spermine, deoxyribonucleic acid, pyrimidine, hyaluronic acid and many others.

As noted above, semen is composed of sperm and seminal fluid. The sperm in seed healthy men during a single ejaculation contains in an amount of from 70 to 80 million constitute only 3% of the total ejaculate. It is an average figure. The remaining 97% are the secret of the prostate gland and seminal vesicles fluid. Scientists have found that in the first batches of the final ejaculate contains far more sperm than subsequent ones, particularly the latter.

Interestingly, the composition of the seminal plasma is complex. The fact that it contains significant amount of proteins, carbohydrates and even fats. In addition, there are plasma enzymes, hormones and other substances.

Speaking about the physical properties of the newly formed sperm, it should be noted that this viscous-sticky mucoid heterogeneous opaque liquid. It smells like raw chestnut. There are people who claim that semen has a slight odor of chlorine. The taste of male ejaculate depends on the nature of the power of its owner: the taste can be salty-sweet, bitter and even sour. Scientists have noted that frequent ejaculation make sperm taste less sweet with the strengthening of bitterness. Fresh ejaculate after a while (from 20 seconds to 1-2 minutes) liquefies, is homogeneous and less viscous, but more watery and transparent.

In what amounts allocated sperm?

Sperm is small and agile, the male cells. One male sperm consists of a head, neck, calf and flagellum (tail).

In addition, the number of male sperm may vary depending on the health status of its owner, from the amount of alcohol consumed and their liquid, from his age, etc. Scientists have made an interim conclusion, based on practical cases from the life: a large amount of sperm does not mean its a higher fertilizing capacity. Sometimes it is even detrimental to the fetus, because it is associated with private miscarriages in women.
Is the advice useful?
See also
Присоединяйтесь к нам
New advices