Where is the border of Europe and Asia

The Eurasian continent has no clear boundaries within ourselves. The location of Europe and Asia frequently reviewed, challenged, changed. Today, the border between the continents marked officially, but many scientists do not agree with the decision. 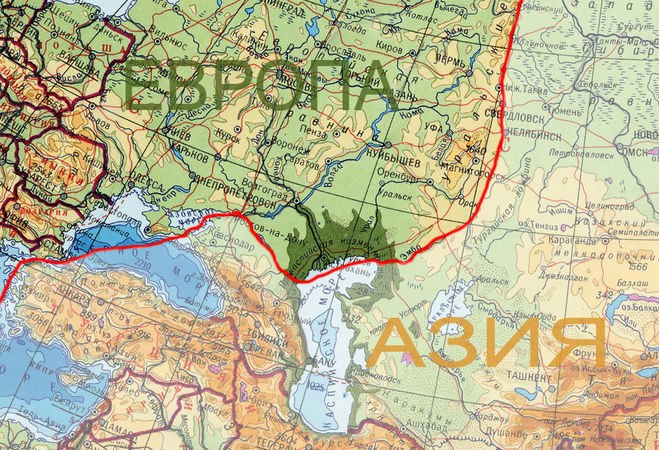 The official border between Asia and Europe

The border across the continent to spend very difficult. Between Asia and Europe and it has constantly changed its shape. This occurred because of the gradual development of the Ural mountains and lands of Siberia.

The formal separation of a single continent into two (North-South) was completed in 1964. At the 20th Congress of the International geographical Union, scientists have drawn a clear boundary between Asia and Europe. These data were recorded next position.

The beginning of the boundary takes in the Kara sea, in Baidaratskaya lip. Further, the dividing line runs through the Eastern part of the Ural mountains and follows down the East of Perm region. Thus, Chelyabinsk and Yekaterinburg are located in Asia.

Further the border goes along the Ural river, goes to the Orenburg region and descends to the Northern part of Kazakhstan. There it connects to the river Emba and pulls straight into the Caspian sea. Leaving the Northern coast of the Caspian sea in Europe, the border reaches of the river Kuma, and with it crosses the Northern part of the Caucasus mountains. Next, the path passes along the don to the Azov sea, and then back to Black. Of the latter, the border between Asia and Europe "follows" in the Bosphorus, where it ends.

Ending in the Bosphorus Strait, the border was divided into two continents, Istanbul. As a result, it has two parts: European and Asian (Eastern).

On the way to the border there are some States which she happily shares on two continents. This applies to Russia, Ukraine, Kazakhstan, and Turkey. It should be noted that the last "got" most of all: the border is divided into two parts of its capital.

Recommendations about the location of the boundaries

However, following the official boundaries, disputes and arguments about it have not ceased. Scientists claim of the impossibility of holding a clear line for any internal/external parameters. For example, vegetation, climate or soils. The only real criterion – the geological history of the area. Therefore, the Urals and the Caucasus was the main border landmarks.

Today the Caucasus and the Urals are the border part. It is only with their feet, leaving the mountain intact. This approach significantly simplified the work of geologists.

But this situation is affected by difficulties in the work of cartographers. Reproducing one of the continents, scientists had to divide mountain ranges into unequal parts. To carry out this procedure accurately is almost impossible. This situation had a negative impact on the work of geologists who frequently use cards: part of the mountains were "scattered", though has historically been the single arrays.

So today there are some recommendations and agreements. The Ural mountains can be fully attributed to the European continent. The Caucasus mountains are often wholly displayed in the Asian part. The Azov sea is the European.
Is the advice useful?
Подписывайтесь на наш канал