Recipe pickled beets for the winter

Pickled beets in the winter may serve as a good appetizer and become a real decoration of the table. In addition, it can be used as a complement to roasted or stewed meat. Pickled beets are also an excellent component of salads and vinaigrettes. 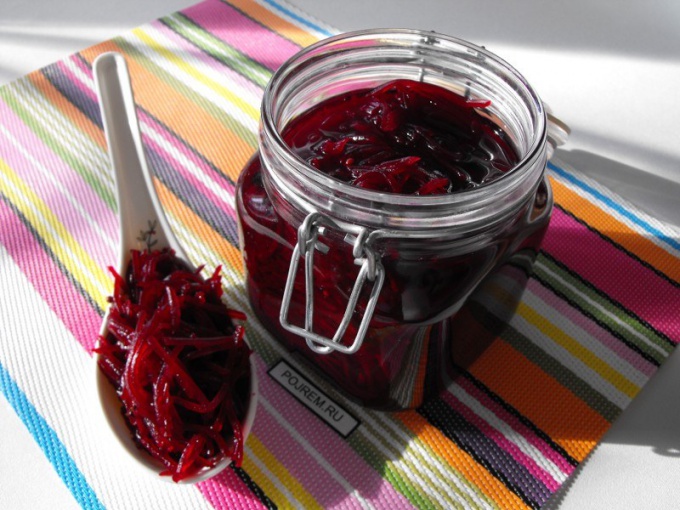 How to cook pickled beets

Beets really well, rinse under cold running water. Then put in aluminum pan, cover with water and simmer until then, until the beets are soft. Then remove from heat and let cool right in the broth. After that, peel beetroot, cut into small cubes and put in a pre-prepared (washed and sterilized) jars and cover with marinade. For its preparation pour into a clean pot of water and add all the ingredients: sugar, salt, vinegar, pepper, cloves and Bay leaf. Put the marinade in a quiet fire, bring to boil and then cool. Then the banks with beets sterilize and roll covers.

The secrets of delicious marinades

The quality of the cooked marinade very much depends on the type of vinegar used. Especially delicious marinades, cooked in aromatic herbs nastoyanka table vinegar or grape. If the vinegar is strong enough (9%), it should be diluted with water in proportion 1:1. And after that add salt, sugar and various spices to taste (pepper, cinnamon, cloves, nutmeg, coriander, Bay leaf, cumin). The number of components of the marinade can vary according to taste. The marinade must be very well writing a rolling boil, after which it must cool.

To pickled products did not deteriorate and is not covered with mold, you need to pour the marinade on top of a thin layer of vegetable oil. Store with jars of pickled vegetables is recommended in dry and cool place.

Pour in a deep saucepan 3 liters of water and add all the other components. Mix well, put on fire and bring to a boil. Then remove the pan from the heat and let marinade 2 hours to infuse. After this time strain the filling through a gauze filter. Then heat to 75оС and pour into prepared and placed in glass jars of beets.
Is the advice useful?
Подписывайтесь на наш канал