What are the most effective pills on the temperature

The fever occurs with infectious and inflammatory diseases, overheating, injuries and certain other health disorders. Most often a fever is accompanied by muscle pain and seriously deteriorating health. To bring the temperature back to normal using antipyretics tablets. 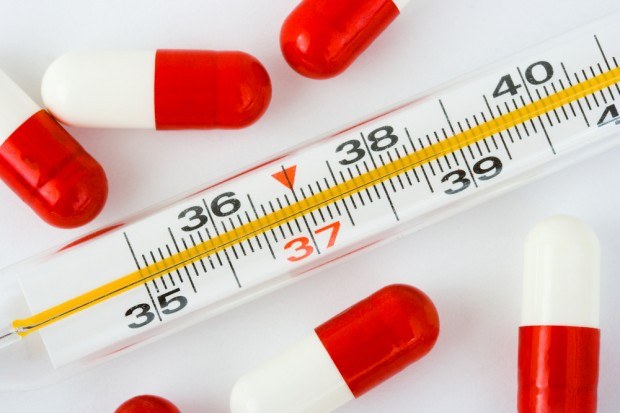 Varieties of medicines from temperature

Most antipyretic tablets belongs to the group of nonsteroidal anti-inflammatory drugs. They not only lower the body temperature, but also have analgesic effect and also help to fight inflammation in the body.

Tablets on temperature, like any other medicines can cause side effects or may not be appropriate because of individual intolerance. That is why the selection of antipyretic drugs is better to trust the doctor.

One of the most popular and time-tested means of temperature are aspirin (acetylsalicylic acid), dipyrone and paracetamol, but they are not always able to deal with high fever in bacterial infections, in the postoperative period and in other complex cases. That is why they are often combined with each other, as well as with drugs from other drug groups, for example with antispasmodics. So, on the basis of funds created by such drugs as "Citramon", "Spazmalgon", "Baralgin", etc.

The drugs based on ibuprofen ("Nurofen", "Ibufen", etc.) and nimesulide ("NIMULID", "Nise", etc.) more efficient and are used for reducing the temperature in cases when paracetamol, analgin and acetylsalicylic acid does not have the desired effect. However, they have a large number of side effects, and therefore should not be used as drugs of first choice without a prescription.

Also to combat the heat, one can use the "Diclofenac", "Piroxicam", and their analogs, but they should be used only in the case if, besides the temperature there are strong joint pain that fails to resolve with other drugs.

In each case, the effectiveness of antipyretics is very different. Thus, during viral infection to bring down the temperature better than paracetamol or aspirin, while bacterial − ibuprofen or nimesulide.

How to choose antipyretic tablets

Choosing baby pill, you should first focus on doctor appointments, diagnosis, age and weight of the patient and his history. So, if you have chronic diseases of the gastrointestinal tract and the kidneys take non-steroidal anti-inflammatory drugs very carefully and only in the case to bring down the temperature of the non-pharmacological means is not possible.

In Pediatrics in most cases, used only formulations based on paracetamol and ibuprofen, as other means can cause serious complications or seriously impair the health of the child.
Is the advice useful?
See also
Присоединяйтесь к нам
New advices