What to do when an ectopic pregnancy

Ectopic pregnancy is a pathology in which the fertilized egg attaches and develops not in the uterus but outside it. Most common tubal pregnancy (about 98% of cases), less frequently in the ovaries, cervix and abdominal cavity. 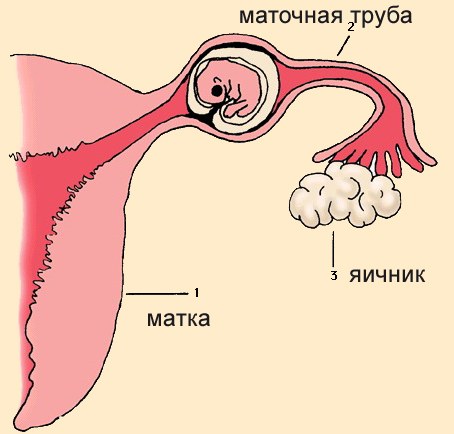 Related articles:
The main reason for the ectopic location of the embryo is tubal obstruction or disruption of their transport functions. Normal fertilization occurs close to the abdominal part of the fallopian tubes, then under the action of the peristaltic movements of the tubal cilia fertilized egg as if drawn into the lumen of the tube. Smooth muscles the walls of the tube alternately shortens and relaxes, thereby ensuring the delivery of the embryo to the uterus where it attaches and begins to develop.


If for some reasons the fertilized egg reaches the uterus, it implants and begins to develop where it is. The pipe can be impassable due to adhesions formations that formed as a result of the inflammatory diseases. Or contractile function can be impaired due to congenital anomalies of infantilism, when the tube is narrow and winding, and the smooth muscle layer is underdeveloped and does not ensure the transport of the fertilized egg.


Upon the occurrence of ectopic pregnancy symptoms that a woman feels similar to the usual manifestations of pregnancy. This is the delay period, slight weight gain, change in taste, etc. up To 4 weeks of pregnancy differences on sensations does not happen. After the first month the fertilized egg reaches such proportions that it begins to stretch the fallopian tube. At this point, joins pain, which forces a woman to seek medical attention. If all signs of pregnancy you have abdominal pain or spotting, you should immediately contact your gynecologist.


The doctor will make inspection, to confirm the presence of pregnancy, and send you to ultrasound examination. If in the uterus the fertilized egg is not detected, then the diagnosis of ectopic pregnancy is confirmed. In this case, the prescribed stationary examination and treatment.

Ectopic pregnancy is dangerous because to bring it to the statutory deadline is not possible. She should be interrupted in any way, alone or with medical assistance. When a self interrupt occurs tubal abortion or tubal rupture. Both are an indication for emergency surgical intervention.


The tactics of women with an ectopic pregnancy one – the removal of the ovum from an atypical point of attachment. Done mostly laparoscopically, sparing for the patient. During the intervention try to keep the fabric tubes for subsequent pregnancies. Open abdominal surgery is currently carried out rarely, only in the case of a pipeline rupture and massive intra-abdominal bleeding.


In the postoperative period conduct anti-inflammatory therapy for the prevention of recurrence of the formation of adhesions and repeated ectopic pregnancies. Hormonal contraceptives should be taken within six months. This is the time needed for recovery before the upcoming pregnancy. Unfortunately, ectopic re-attachment of the embryo is not rare if there is a history of such a case in future pregnancies it must be borne in mind.
Is the advice useful?
See also
Подписывайтесь на наш канал