In 60-ies in the Soviet Union began the mass construction of houses of hotel type, which were designed to save money on construction and to provide everyone with housing. Apartments or rooms in them was called a dormitory, they was a very small area, and sometimes a lack of food. 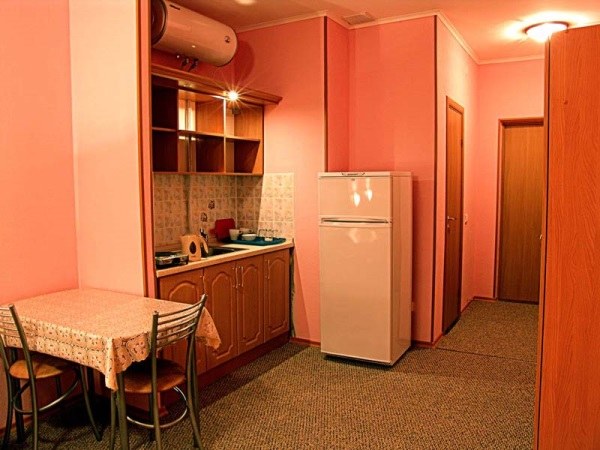 Hotel-type houses is a high-rise building (typically up to 16 floors) with a very large number of small apartments. Such houses were built in the USSR in 60-e years, they differed from the normal only by area and the number of premises, and from the point of view of communications should have been fully equipped with everything you need: electricity, water, heating. In buildings with floors higher than 9 set of electric stove instead of gas.

For the construction of these houses was used or incomplete frame, either transverse or longitudinal load-bearing walls. Hotel-type houses are divided into two types: one in which there is a separate kitchen and a bathroom, and rooms without a kitchen and a much smaller bathroom.

In the doorways of houses of this type uses a corridor system, on one floor can fit up to forty flats.

Units quickly called dormitory. They are named so because very similar to hotel rooms, their area does not allow to put extra furniture – will fit a bed, bedside table, narrow wardrobe and a TV. The average ranges from 11 to 24 square meters depending on the type of home. Apartment with a separate kitchen more spacious: room from 12 to 18 square meters, kitchen – 6, but some of the houses designed for one room, where plays a place for a kitchenette. Sometimes the kitchen set in the hallway, sometimes in the room. There is enough space only for washing, a narrow plate and a small cutting table. Many houses have loggias and balconies, which usually stretch over the entire width of the apartment.

Bathrooms in most apartments of hotel type are so small that they can not install a typical tub: can be equipped with either a shower or a sitz bath.

Should be distinguished from the common dormitory today studios. The studios is also a kitchen combined with a room, she is either in a corner or in an alcove or separated by a wall. But the area of such apartments much more.

Dormitory continue to be popular due to low cost. This housing is well suited for young people, students, young families who cannot yet afford a more spacious apartment. Often in houses of hotel type to settle single pensioners, to save money for housing services or to change existing apartment.
Is the advice useful?
See also
Присоединяйтесь к нам
New advices