Lobster, he is the lobster – decapod crustaceans. The name "lobster" is of English origin, and "Omar" - French. Under these two names hides the same representative crustaceans. 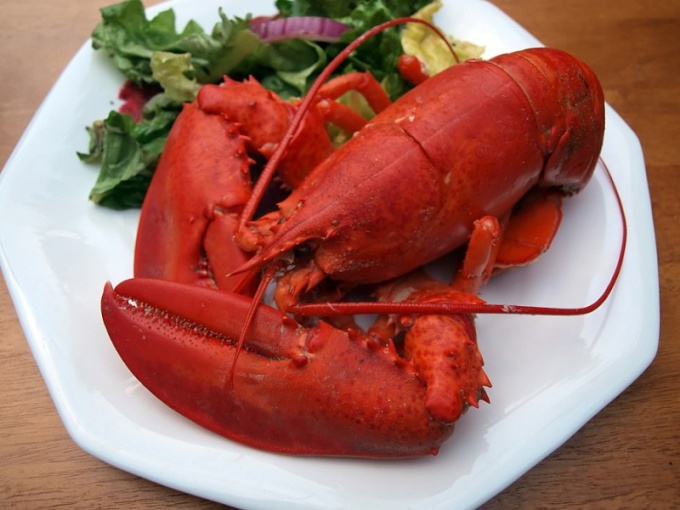 Lobsters can vary in color from gray-green to greenish-blue. Have live lobsters only antennae are red in color. In the heat treatment process it is painted, all the body of this crustacean.

The torso of the lobster pointed at the head, the tail is fan-shaped, and the abdomen is divided into seven divisions. The first pair they have very powerful claws. The average size of lobster is 30-50 cm and the weight is 300-700 grams. Individual specimens can reach a length of one meter.

Lobsters live in both warm and cold ocean waters. They prefer to settle on the rocky and sandy shallows, mostly in crevices, where out to fish only at night.

The most valuable are the Atlantic lobster. Their taste is much better than the brothers. The length of these lobsters is 22 cm. In the seas of Norway can meet European lobster, the length of which reaches up to 90 centimeters, and the weight is above 10 kg. On the coast of North America, lobsters are bred on special farms. Their length reaches one meter and a weight of 20 kilograms.

However, the expressiveness of size is not always confirmed excellent flavor. So, in the waters of the Indian ocean there are tiny lobsters, which taste richer and more interesting.

Lobsters are sold in stores in canned, frozen and fresh. A clear indicator of quality live lobster is its mobility. What he actively moves his eyes and a mustache, so it is fresh. Best place to buy live lobsters in the period of their catch in spring or early autumn. Thus it is necessary to give preference to males because their meat is more tender and tastier.

The most delicious part of the lobster is in its tail. The legs and the claw meat is tasty, but very dense. It's pretty tough to digest, but rich in mineral salts, protein and "good" cholesterol.

On the head of the lobster, in the shell, is liver – tamally. Her appearance looks not very appetizing. The liver is a bunch of green foam. Meanwhile, it is recognized as a delicacy. From the liver of the lobster is prepared amazing sauces and soups. The red ROE of female lobster is also considered a delicacy.

Lobster can be boiled, baked or fried. The most basic way of cooking is to boil whole in salted water for 5-7 minutes. In the process of boiling, it acquires a red color.