How to make cold cucumber soup

Cold cucumber soup – a dish popular in many cuisines of the world. The most famous kind of soup is a famous Spanish white gazpacho, but similar recipes are in "cooking the books" of the British, French, Greeks and many other peoples. 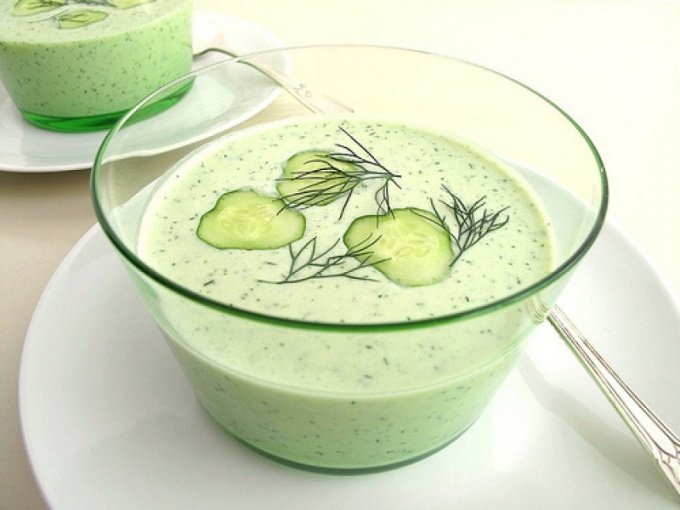 Gazpacho is a famous Spanish soup that is usually prepared based on tomatoes, and on, it is painted in red tones. However, there are many recipes for white gazpacho, is no less traditional. For its production using garlic, white bread, almonds, cauliflower and, very often, cucumber. Try to cook this soup took:
- 2 dlinnoplodnye cucumber;
- 2 cloves of garlic;
- 300 ml of chicken broth;
- 100 grams of sour cream;
- 100 GMS thick yoghurt;
- 3 tablespoons sherry vinegar;
- salt and freshly ground white pepper;
- 3 pen green onions.

Clean the cucumbers from the skin, using a peeler. Cut the vegetables in half lengthways and remove the seeds. Cut cucumbers in small dice, peel garlic and pass it through the press. Put in a blender the cucumber and garlic, pour half of the broth and preroute into a homogeneous mass. Add the sour cream, yogurt, vinegar and the remaining broth, season with salt and pepper. Stir, cover and put in refrigerator. Serve sprinkled with chopped green onions.

Peel and chop cucumbers in small dice. Mix yogurt and vegetable broth, pour into blender, add the cucumber and herbs and preroute. Season the lemon juice and salt. Let cool and serve.

Asian soups are one of the most unusual dishes for European tastes. Try to cook cucumber soup as it is prepared in Korea. Take:
- 3 short cucumber;
- 1 teaspoon minced chili pepper;
- ¼ Cup Apple cider vinegar;
- 1 tablespoon of sugar;
- 2 tablespoons of soy sauce;
- 1 tablespoon of sesame oil;
- 4 cups of filtered water;
- 2 teaspoons of sesame seeds;
the ice - cubes.

Cucumbers cut into strips. Mix with pepper, vinegar, sugar, soy sauce and sesame oil. Leave on for 10-15 minutes so that the vegetables gave the juice. Pour in water and put in the refrigerator for 20-30 minutes. Before serving, add the sesame seeds and ice.
Is the advice useful?
Подписывайтесь на наш канал