At what temperature to bake a pizza

Pizza – popular all around the world Italian dishes with a distinctive rounded appearance and a classic recipe with tomatoes and melted cheese. It added all the possible and sometimes most unexpected ingredients, consistent with their tastes. But how and at what temperature you need to cook this Italian dish? 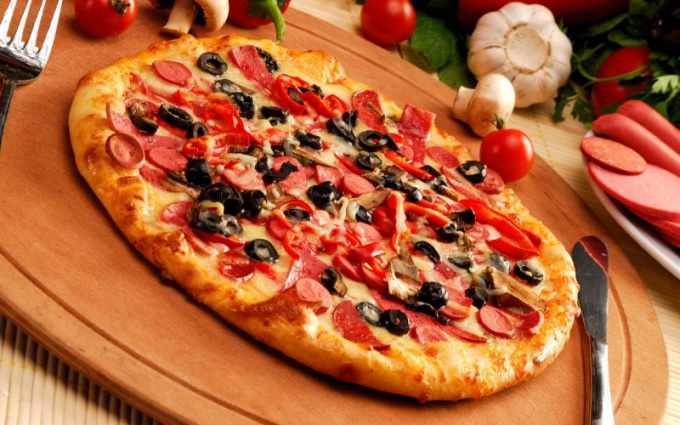 A little bit about the pizza

The first pizza or, to put it more precisely, the dish is a prototype, prepared by the ancient Greeks and Romans, zapekalsya certain foods on a loaf of bread. After 1522 in European countries was imported American tomatoes, Italian residents of Naples and invented the famous pizza.

In Naples, this dish was prepared by special people culinary profession pizzaiolo ("pizzaiolo").

The dish appeared thanks to American vegetable, spread to the USA only late in the second half of the XIX century in Chicago. And in 1957 the food industry in the country launched the first semi-finished pizza.

A classic recipe of pizza dough includes a mixture of regular flour and so-called flour-durum ("durum", made only from hard wheat) and yeast, olive oil, salt and water. After connection of all the ingredients, pizza maker knead the dough by hand and rolled it to a thickness of half a centimeter thick. Then the dough is covered with tomato paste, which has already been laid out any filling.

Traditionally, the pizza must be baked in a wood oven, but the modern food industry allows the use of bottom and conveyor units. Housewives, including in Russia, have also long pizza in his own way, sometimes with a link purely Russian food package.

The temperature required for baking pizza

The time and temperature of cooking this dish depend directly on the pizza recipe, its ingredients, place the baking and desirable podzharistoy.

For example, if you are cooking pizza in a home oven, believing factor is whether the filling on the dough immediately or put it on after baking the crust until soft.

If you want to bake pizza with a small amount of quickly prepared the filling, you will need a temperature of 200oC and time of 14-16 minutes. During this time period, the dish will acquire a desired Golden crust.

Almost like preparing a pizza-type "Florence" baked on the surface of the dishes with eggs. She's also in need of 200, but different time periods – first 10 minutes, and then, after adding the eggs, another 8 minutes.

The temperature is high, but the same is the time required for cooking varieties of pizza "4 seasons", which is characterized by a large number of toppings – 300oC and about 13-15 minutes of cooking.

If you decide to make a pizza that is called "whip up" in a frying pan, then just place it in a bowl and cover with a lid. In this case, of course, difficult to determine the exact temperature, so you just need to lower the power of fire to a minimum. Readiness test is determined with a toothpick: if it comes out clean, the pizza is ready.
Is the advice useful?
Подписывайтесь на наш канал