When the day of Ivan Kupala

Midsummer day, or the day of Ivan Kupala is one of the most important pagan Slavic holidays. They celebrated it in the summer solstice. With the emergence of Christianity in Russia, it was correlated with the day of the Nativity of John the Baptist. 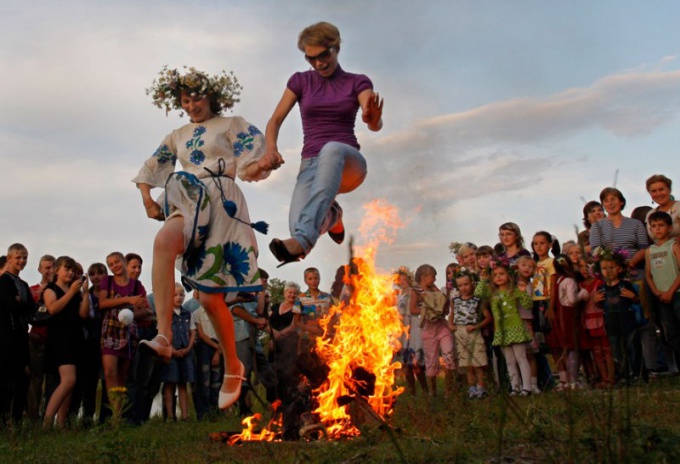 Every year on the night of 6 to 7 July in Russia still celebrate Midsummer, also known as Midsummer. In some European countries (e.g. in Finland) to celebrate this day, old style, in the period of the summer solstice on the 23rd and 24th of June.

This holiday encompasses so many shades of paganism ancient and mysterious customs. It's filled with lots of mystical elements and breathtaking magic.

In ancient times, the pagan Slavs held a variety of ceremonies, which was a lot. A feature of certain ceremonies was that they need to produce only the night before Ivanov in the afternoon. And this is no accident. In such a period, as it was considered that the water its mystical properties and helps get rid of many diseases.

So swimming was the main ceremony, which was to hold every person. In the absence of a lake or river, the pagans flooded his bath and began to bathe. With the aid of a couple they were free from ailments.

The pagans loved in Midsummer to jump over the fire. They believed that the higher you go over it, the happier life will be.

The fire also has mystical properties. Slavs have a bonfire on the shore of a lake or river and began to drive around it dances. Thus, they freed themselves from disease and evil spirits that have accumulated in them.

The particular belief was in young couples: if a girl and a guy can jump over the fire not Razumkov their hands, their marriage will be very strong.

Mother also did not stand aside. They brought the old clothes of their ill children and burned it. Thus mother freed her child from physical and mental diseases and ailments. The peculiarity of this night is that at this time in any case can not sleep. The fact that it was in the night on Midsummer day become active goblins, mermaids, witches and other evil spirits that can defeat the human hibernation, to bring him pain and suffering.

Divination on the day of Ivan Kupala

In the past a favorite pastime of young girls was reading. As a rule, they used this woven wreath. They put it on the surface of the water and released to float freely. If he swam well, it was believed that life will be happy. If the wreath sank, life will be less successful and it will be difficult to marry.

The holiday of Ivan Kupala was a kind of carnival in Slavonic. On this day, allowed to do very much, leaving aside the limits of decency. The tradition of Midsummer are unable to change even the strict morality of Christianity. No wonder Ivan Kupala also popularly called Ivan Gossim.
Is the advice useful?
See also
Подписывайтесь на наш канал