How to cook soup with barley

Pickle with barley is a traditional hot Russian soup. Cook it to your liking: beef or mushroom broth. First quickly warm in the cold, you and your loved ones, the second will be a nourishing first meal during lent. 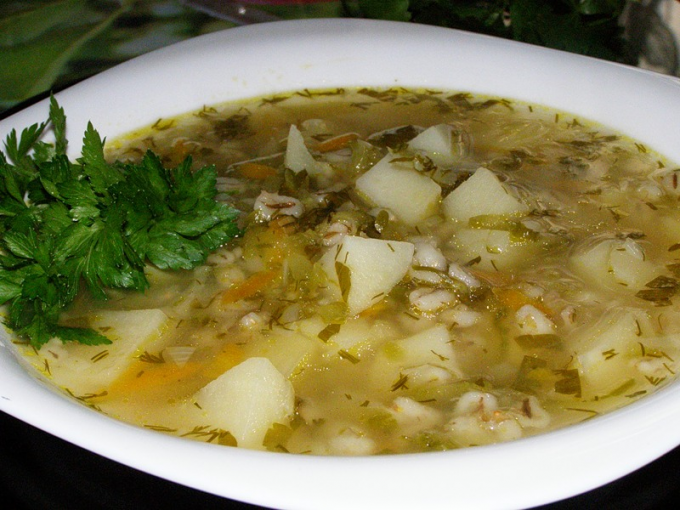 Pickle with barley in a beef broth

Place the beef in a medium-size pot and pour 1.5 liters of cold water. Bring the liquid to a boil over high heat and immediately drain. Rinse meat with grey foam, again put it in a bowl, pour 3 liters of water and cook the second broth for 2 hours on slow fire under a cover.

Thoroughly rinse the barley under running water, boil it in boiling water and let stand 40 minutes. During this time several times to change cold water to hot, each time throwing grits on the fine-meshed colander.

Finely chop peeled onion and carrot. Fry in a pan with hot oil, first the onions for a few minutes, throw him the orange strips and cook, stirring, another 3-4 minutes. Chop pickles, cut in slices the potatoes peeled.

To enhance the taste of pickles to fry until transparent, making the second sauté for soup.

Svalivsheesya remove beef and let cool. Separate the meat from bones, cut into small pieces and return to broth. Turn up the heat to average and throw in a pot of steamed barley. Simmer for 15 minutes, then add the potatoes.

After 15-20 minutes put in the pickle fries, the pickles, pour the brine, dosolit to taste, and season with pepper, Bay leaf and cook for 5 minutes. Leave the soup for at least 20 minutes under the lid, removing the dishes from the stove. Pour it into bowls, sprinkle with chopped parsley or celery.

Vegetable soup with barley and mushrooms

If you take frozen mushrooms, then give preference to cut the product. In this case, you do not have to wait for it to defrost meats, and can be sent directly into the pan.

Soak the barley in cold water for 2 hours, after which put it in a small colander and hold under running water, removing slime. Put grits to boil 2.5 liters of pure water for 20 minutes. Soak mushrooms, cut off with dirt, coarsely chop and fry in vegetable oil until soft. Put them in a pot along with diced potatoes.

Do zazharku of carrots and onions, as described in the previous recipe. Grate the pickles. Enter all supplements vegetable in mushroom soup, add salt if necessary, throw a Bay leaf and cook until done on medium heat for 5-10 minutes. After 20-30 minutes of infusion, divide the soup into portions and serve.
Is the advice useful?
Подписывайтесь на наш канал