The old part of any city a much more interesting ultramodern skyscrapers. Here you can see the unique architecture and just feel the spirit of antiquity. 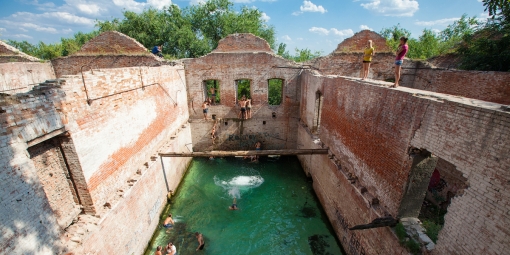 Related articles:
1. Paramonov's warehouses (Beregovaya 47-51). Some of them restaurerede, part is used for shops and the exhibition of wax figures, and some continue to slowly deteriorate. Warehouses were built in Rostov the dealer for grain storage. With troughs, which allowed spring water, which is year-round not exceeding 9 degrees, in the warehouses to maintain a constant low temperature, favorable for grain storage. These natural springs still gush from the walls of buildings. In winter, the spring does not freeze, and the grass next to - green all year round. The warehouse is bathed by many locals, and even made a makeshift pool by closing holes in the wall and cleared the bottom. The architecture of the warehouses is very interesting. They are a monument of Federal importance really care for them only local volunteers. Warehouses can meet a lot of old red bricks with stamps. In the daytime a good place for walks and photo shoots.

2. Abandoned pool "Spartak" (Bogdanowski descent 1B), he is also a former Dolphinarium. The building consists of three floors plus basement. A feature of this pool was the water - it was there Bogdanovskaja a spring, which in the 19th century was fed by the city water system. The building itself is built of big old bricks. But gradually destroyed, although it is still possible to see remnants of the interesting architecture and unusual columns in the building.

3. The house of architect Grigorian (St. Murlycheva, 22/11, St. 20-ya Liniya). Mansion of the 19th century. Although the house is unguarded and vengeance are vandals, yet beautiful elements yet remained. In the house, you can meet interesting findings from former tenants. And also to see a unique stucco and remains of the former luxury.

4. The river loading point ( from the Coastal 71 down-to - Donu). The former cargo terminal and supporting the bulls loading conveyor mill Paramonova. The structure of two towers and a metal jumper between them . There's also a number of abandoned Flour mill and the bridge mounted conveyor (loading and milling plant).

5. Graveyard train (stop "Rostov West"). 7 is a parallel railway lines with standing on them trains with 50 years and our time. The condition of many cars is still quite decent, so there often like to take photos. Locomotives, railcars, locomotives waiting for the renovation to take its place in the railway Museum. But instead of rusting here and most likely will go under the knife.