How to get rid of brown algae in the aquarium

Sometimes walls, plants, soil and other accessories in the aquarium covered with a brownish tinge. It is not only extremely aesthetically pleasing, but also dangerous to aquarium inhabitants. If there is a similar situation, we urgently need to take action. Enemy of the aquarium - algae growth. This multicellular organisms, which appear under the wrong lighting and the excess of organic matter. 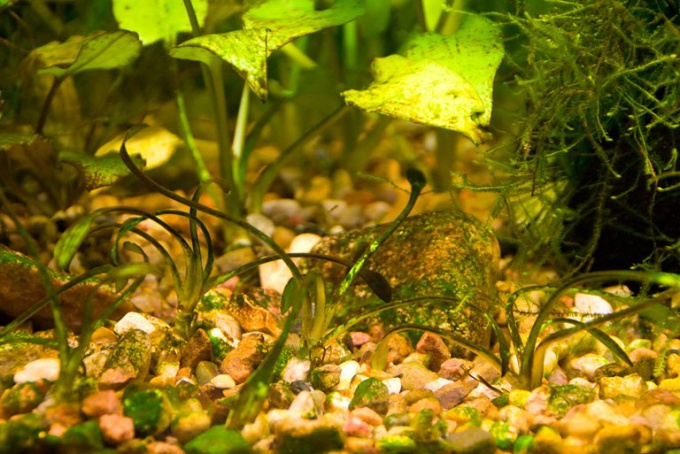 Related articles:
You will need
Instruction
1
To combat the brown algae you first need to know the reasons for their occurrence. Low light, high content of nitrates in the water, high pH, low carbon dioxide content - all of which can lead to the appearance of brown algae.
2
Oddly enough, help us in the fight against brown algae can become higher plants, that is, cultural algae, specially planted in the aquarium. They will absorb all the nutrients, dissolved in water, and brown algae do not get it.
3
To fight against aquatic enemy to effectively use fast-growing plants need a fairly densely planted their entire area of the aquarium. You need to create the right lighting for best plant growth, the light day should be about ten hours.
4
The need to reduce the content of organic substances in the aquarium. It is important to regularly replace part of the water volume and reduce the amount of feed. Pets have to eat all the food in about two minutes, the rest is surplus.
5
Extremely useful to put in aquarium several catfish. They love to eat brown algae, and they will be happy to help to get rid of them. Five catfish-otocinclus able to maintain order in an aquarium with a volume of one hundred liters.
6
Emergency measure in the fight against brown algae is to use special chemicals. However, it should be remembered that their effectiveness is temporary. Such chemicals are sold in the pet store. The consultant can help you choose the best option. There are also special water conditioners, they accelerate the cultural growth of aquatic plants and improve their appearance.
Note
Catfish-otocinclus is a true "janitor" for the aquarium.
Useful advice
Easier to deal with brown algae, if you find out the reasons for their occurrence.
Is the advice useful?
See also
Присоединяйтесь к нам
New advices