How was filming "the Magnificent century"

Turkish series "Magnificent century" is popular in all countries. In Russia, viewers are showing him the most interest. Millions of fans are looking forward for the weekend to see the continuation of the love story of the main characters of Sultan Suleiman and Slavic concubine, and later, his legal wife Alexandra Hürrem. 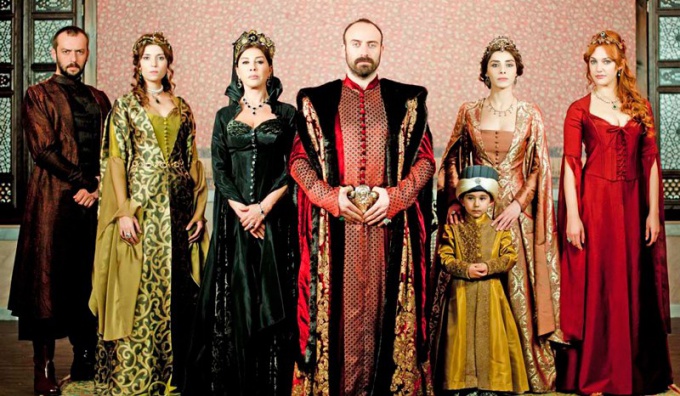 Related articles:
Instruction
1
Initially, the project of creation of historical series of this magnitude caused a huge doubt - many did not believe that he is worth such a significant expenditure for its creation. In the beginning, the creators of the series, Meral Okay and Timur Savci was only a script written by Meral and a great desire to make a luxurious movie on a historical basis.
2
The name of the series, Meral Okay came up without difficulty. The difficulty was that all refused to participate in the project, which for Turkey, it seemed unreal and very expensive. Indeed, Meral and Timur was horrified when the first estimated necessary budget of the series. But the difficulties did not stop them and they continued to prepare for filming.
3
The writers of the daily has done a great job. Historical facts about the reign of Suleiman the Magnificent remained very small, gathered them bit by bit. Some historical details in the series changed to make the drama or to create intrigue.
4
The scenery to the series "Magnificent century" be 5000 square feet - it is scenery of Istanbul now at the Topkapi Palace, which recreate a real decoration of the chambers of the great sultans and their concubines. Some of the courtyards for the filming was built in the open air, they take up 3,000 square meters. For street filming was arranged for the decoration of one of the oldest quarters of Istanbul.
5
Directors of the series - Lena and Durul Tilani - known in Turkey, on their account more than ten movies. Reading the script Meral Okay, they were interested in the project, advising Timur Savci to come up with for each character your look with the chic suits. So there was a huge sewing workshop, where they blow the outfits for the characters of "the Magnificent century.
6
Starring in the series performed by the actors Halit ergenc and Meriem Userli. The role of Sultan was brave and beautiful Turkish actor Halit ergenc was perfect for the role of ruler of the Turkish Empire. But the role of the Slavic concubine Alexandra Lisovskaya, which later became the legal wife of Suleiman Hürrem Sultan, could not find an actress.

Red-haired beast Meriem Userli Timur Savci happen to find by accident - talking on the phone with his girlfriend in Berlin, he complained that could not find an actress, and she told him Meriem. Once the crew met Meriem, have left no doubt that she will play in a series lead role.
7
The role of other characters of "the Magnificent century" was invited to the famous Turkish actors. Their game is flawless. "Magnificent century" fully justifies its name, and wildly popular in many countries.
Is the advice useful?
Присоединяйтесь к нам
New advices