How to cancel the entry in the workbook

The basic rule of correcting wrong or inaccurate records in the labour books: the wrong entry you need to rewrite is not easy, but with the obligatory explanation of why this is done. 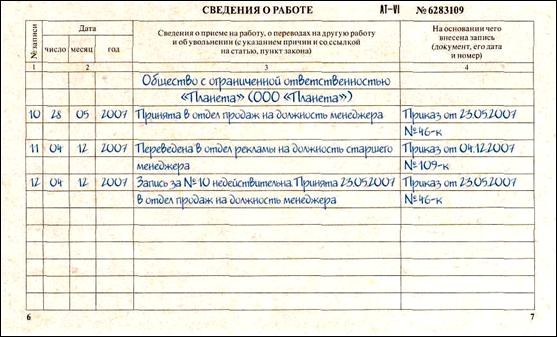 Related articles:
You will need
Instruction
1
In employment record books of employees are often made the record wrong. If errors are found, you must make the entry on the invalidity of entries made erroneously. You need to specify: "the Record for the number.. invalid."
2
If instead wrongly made entry, you must make another entry, should be after the words "Record for the number.. invalid." to make the desired entry.
3
Errors can be detected and other graphs work book, for example, when recording of job's wrong was the date of employment. When making corrections to indicate the correct date of employment in column 3, in the record itself.
4
If you make an erroneous entry in the organization name, after the last entries in column 3 indicate that in the name of the organization made a mistake and then made entry with the correct name of the organization. Counts 1 and 2 are not filled.
5
Part 4 of article 61 of the labour code indicates if the employee has not commenced work on the first day of work, the employer has the right to cancel the employment contract. In this situation, it is possible that the employer has already issued the order on employment and made the entry in the work book. After writing about hiring need to make an entry: "Entry#. invalid, the employment contract cancelled."
6
In the case of recognition of the illegal dismissal and restoration work on the former entry of dismissal in the labor book of the employee shall be deemed invalid. Is the entry: "Entry # ... invalid restored."
7
In the section of the work book "record of awards" strikethrough inaccurate or incorrect entries is not allowed. Modification of entries is done by being invalidated and make the correct entries.
Note
In case of detection of incorrect records in the workbook still work, corrections may be entered by the employer at the new place of work, but on the basis of an official document of the employer, made a mistake.
Useful advice
In the section "Data on work" in the workbook strikethrough previously made incorrect or inaccurate entries are not allowed. They should re-write in the correct form.
Is the advice useful?
See also
Подписывайтесь на наш канал