How to cook Poltavka

Poltavka Poltava or grits is semolina from durum wheat that looks like barley or barley grits. It is available in four varieties such cereals: large, two medium varieties, with grains elongated or oval, and small, with grains of rounded shape. From this small Poltavka as offering the best quality, cooked cereals, stuffing for poultry and pies. 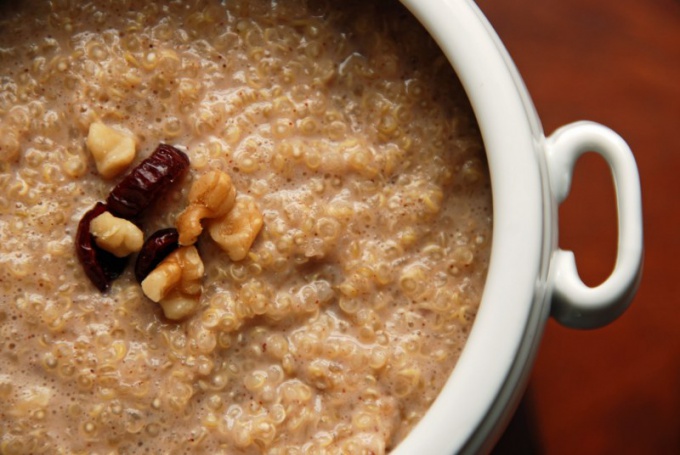 Related articles:
You will need
Instruction
1
Mix cereal with protein, spread a thin layer on the pan and toast them in the oven. Dried mushrooms wash, put in a saucepan with cold water, put the saucepan on the fire, bring to a boil, when the mushrooms soften, drain the mushrooms and finely chop. Then add in the mushroom broth, sliced mushrooms and bulgur, simmer for 20 minutes, then remove the pan from the heat, wrap in paper and a blanket and leave to steam for 1 hour (serve porridge with melted lard, you can also add chopped boiled eggs and sour cream).
2
Wheat porridge

Take 1.5 tablespoons of millet (40-45g), loop through, rinse thoroughly (5-7 times) in warm water, stirring the cereal with your hand until the water is clear. Pour the cereal with boiling water, drain the water, again pour a glass of boiling water and cook 50-60 minutes to cereal were well pulverized and became soft (children up to the age of 9-10 months rump rubbed through a sieve while it is still hot).
3
Pour 1/2 Cup hot milk (100 g), add incomplete teaspoon (6-8 g) of sugar, a pinch of salt, RUB through a sieve, if cook porridge for children under 10 months put it back on the stove and cook, stirring, 5 minutes until the porridge thickens. In the finished porridge, add half a teaspoon (5-6 grams) of butter.
4
Chicken porridge from cereals Poltavka

Stir in the groats in 1.5 cups of boiling water, cook, stirring constantly, then cool. Wash and slice the chicken, finely chop chicken giblets with parsley, the yolks separate from the whites, then the yolks of eggs spread with butter. Add to cereal, chopped giblets, parsley and seasoning to taste, stir, then beat to a froth the whites and mix into the stuffing last.
5
Fill the abdominal cavity of chicken with stuffing and sew. Bake on medium heat until lightly Browning, then to the pan pour a few tablespoons of water and bake until soft. Serve the chicken cut in half with the cucumber salad.
Is the advice useful?
See also
Подписывайтесь на наш канал