How to use pager

The pager is a receiver of a personal challenge. It is arranged in such a way that allows you to receive short text messages through the paging network. The very first pager was released by Motorola in 1956. He immediately became popular with nurses, taxi drivers, couriers. That is, people of those professions that constantly needs to be connected. 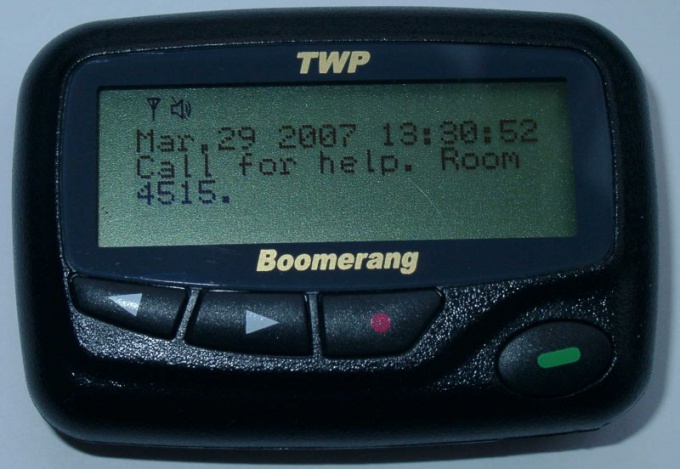 Related articles:
Instruction
1
In our country, pagers were very popular in the nineties. But, in connection with the distribution and availability of mobile phones, they are losing ground and almost gone from everyday life of our citizens.

If you want to use a pager in Moscow, use the services of paging companies that still operate in the market. For example, on the territory of Moscow and Moscow provides services paging company Vessolink.
2
To send a message, call the operator, enter the subscriber number and the spoken text message. There is also the ability to alert multiple users by bulk shipment. With the help of modern pagers send messages by email or mobile phone. If you want, organize a hot line or system alerts from various points. Overall, at the moment, the possibility of using a pager is quite extensive. This allows to apply them in different situations. Besides the cost of the pager is much cheaper mobile phone. It has the form of a rectangular parallelepiped with a few buttons. So you can easily learn how to operate it. Due to the fact that pagers have long been out of fashion, you can buy them through advertisements in Newspapers or directly from the company of the operator of the paging network.
3
Some pagers have been applied in alarm systems. For example, the gsm pager is arranged in such a way that, when the alarm sent him a short text message. It is very convenient as you can timely take appropriate measures to prevent theft of the car or saving the contents of the safe. The convenience and compactness of the pager makes it a highly practical electronic device. Besides, it is resistant to mechanical stress and shocks. Using the pager in strict accordance with the instructions, can significantly extend the service life.
Is the advice useful?
See also
Подписывайтесь на наш канал