How to learn to do long division

The process of division in a column is the sequential execution of elementary arithmetic operations. To learn how to divide in a column, you just need to practice it a few times. The algorithm of dividing in a column let us look at the following examples - divide in a column of integers with no remainder, remainder and fractional numbers represented in decimal. 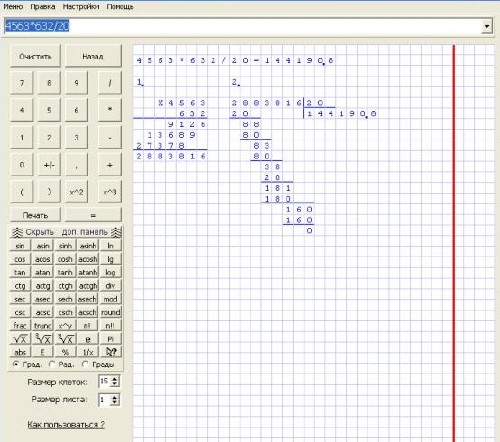 Related articles:
You will need
Instruction
1
Division without a remainder. Divide 1265 55.
Swipe down short vertical line with a height of several cells. From this line a perpendicular swipe to the right. It turned out the letter "T" piled on the left side. Above the horizontal part of the sunken letter "T" spell a divider (55) and to its left in the same place, behind the vertical part of the T – divisible (1265). Usually, the dividend is first written, and then put a division sign in the column (filled up one side with the letter "T"), and after the divider.
2
Determine what portion of the dividend (counting from left to right the highest level) is divided by the divisor. That is: 1 55 no 12 55 – no, 126, 55, Yes. The number 126 is called incomplete severable.
3
Think about the mind, for what number N you need to multiply the divisor to get the number equal to or as close as possible (but no more) to the magnitude of the partial dividend. That is: 1*55 – is not enough, 3*55=165 – a bit too much. So, our choice is number 2. Write it under the divisor (below the horizontal part of the sunken letter "T").
4
Multiply 2 by 55 and write down the resulting number is 110 strictly under incomplete digits of the dividend left – to-right: 1 under 1, 1 under 2 and under 0 6. Top 126, bottom 110. Spend under 110 short horizontal line.
5
Subtract 126 from the number 110. Received 16. Clearly write down the numbers one below the other under the drawing line. That is, from left to right: number 1 number 110 is empty, the numeral 1 – 1, and the numeral 0 – 6. The number 16 is the residual, which must be less than the divisor. If it was bigger divisor, the integer N was chosen properly – you need to increase it and repeat the previous steps.
6
Carry to the next digit of the dividend (figure 5) and record it to the right of the number 16. It turned out 165.
7
Repeat the third step for the relationship 165 to 55, that is, find the number Q by multiplying the divisor by which the number of turns as close as possible to 165 (but not more). This 3 – 165 is divided into 55 without a trace. Write down the figure 3 the right of the number 2 below the line, held under the divider. This is the answer: a private relationship 1265 55 is 23.
8
The modulo operator. Divide 1276 55.Repeat all the same steps as in the division without a remainder. The number N is still 2, but the difference between the 127 and 110 is equal to 17. We carry 6 and determine the number of Q. It is also still equal to 3, but now there is the rest: 176 – 165 = 11. The remainder 11 is less than 55, everything seems to be fine. But to demolish something and nothing more...
9
Add the dividend to the right of the zero and put a comma after the number 3 in private (the number that can be obtained through division, and is recorded below the line, held under the divider).
10
Carry added in divisible zero (write it on the right of 11) and check if there is a possibility to divide the resulting number by the divisor. The answer is Yes: 2 (let us denote it as the number of (G) multiplied by 55 is 110. The answer is of 23.2.If carried in the previous step zero would not be enough to balance with the finished zero was more of the divider would need to add another zero in divisible and put 0 in private after the decimal point (would 23,0...).
11
Division in column of decimal fractions.Move the decimal point the same number of digits to the right in the divisor and divisible so that there were integers. Further, the division algorithm is the same.
Note
Write down all the numbers strictly under each other according to the stated recommendations is not allowed to make a mistake during the calculations.
Is the advice useful?
See also
Присоединяйтесь к нам
New advices